What Is a VantageScore Credit Score?

VantageScore is one of many scoring models that look at the information in your credit reports and generate a number designed to communicate the likelihood you're going to pay your bills on time. You may have seen your VantageScore delivered through educational websites or on your credit card statement. According To VantageScore Solutions, more than 1 billion VantageScore credit scores were provided directly to consumers between July 2016 and July 2017.

VantageScore Solutions LLC is a consumer credit scoring company based in Stamford, Conn. The company was created in 2006 and is jointly owned by the three major consumer credit reporting companies: Equifax, Transunion, and Experian, the publisher of this blog.

How Does the VantageScore Credit Model Work?

Before credit scores were created, a lender would have to read through a borrower's credit history and make an individual determination of an applicant's likelihood of repaying a loan. This took not just a lot of time, but also a significant amount of training and skill. Credit scores streamline this process by summarizing a person's entire credit history to a single number, and therefore lenders are able to automate a portion of the process of approving a loan while ensuring a consistent, objective formula is always being used to make these decisions.

What Is a Good VantageScore? 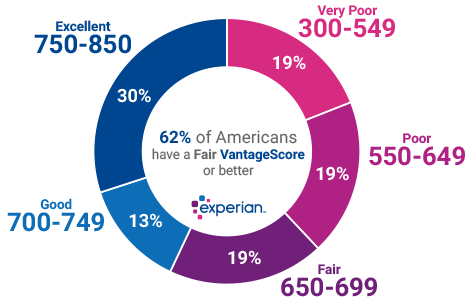 The VantageScore formulas have always used data from your credit history, including your payment history, the average length of time accounts have been open, types of credit, credit usage, and recent inquiries. However, VantageScore 4.0 also employs a concept known as trend data, which looks at patterns of behavior rather than just a snapshot in time. For example, when consumers are paying down their debt over time, it will reflect positively on their credit score.

VantageScore 4.0 also assigns less value to a medical account in collection, as it recognizes that these debts are often the result of delayed payments by insurers, rather than a consumer's failure to pay. In fact, it doesn't even count unpaid medical collections that are less than six months past due.

Note: Beginning in September 2017, all three credit reporting companies—Experian, Equifax and TransUnion—hold reporting of any medical debt for 180 days to allow time for insurance and billing issues to be resolved. This means that since that data will be suppressed from credit reports, no scoring models will use medical debt less than 180 days old.

Why Your VantageScore Can Vary

Like any credit score, your VantageScore credit score is based on your credit reports. The three major consumer credit bureaus receive information from your creditors, such as if you are paying your bill on time. But the data at each credit reporting company may be slightly different because not all financial institutions report to all three credit reporting agencies. Furthermore, there are four versions of the VantageScore formula, and it's possible that some credit score providers could be using different versions.

Finally, the score generated will be highly dependent on what is on your credit report when your credit score is generated. For example, if you recently paid down a large amount of debt, it may not be reported to your credit history until the next billing cycle. Only then will VantageScore, or any other credit scoring model, be calculated using your most up-to-date account balance.

Credit scores and the models that determine them are a critical part of obtaining a loan. By understanding what VantageScore is, and how it works, you'll be better informed as you work to earn the best credit score that you can.

Why Paying Your Mortgage Biweekly Can Save You Serious Money

How Good Is Your Credit Score?

7 Surprising Things That Can Affect Your Credit

How Is Your Credit Score Determined?

Which Credit Scores Do Mortgage Lenders Use?

What Happens When Medical Bills Go to Collections?

How to Maintain a Good Credit Score

The Difference Between VantageScore® Scores and FICO® Scores