At Experian, one of our priorities is consumer credit and finance education. This post may contain links and references to one or more of our partners, but we provide an objective view to help you make the best decisions. For more information, see our Editorial Policy.

Getting a loan means paying interest—it's the cost of borrowing money. Just how much interest you'll pay depends on your interest rate. Or does it depend on your APR (annual percentage rate)?

The two terms are often used interchangeably, but sometimes there is a difference. When it comes to mortgages, car loans, and other types of installment loans, the difference between APR and interest rates is important. But when you're evaluating a credit card offer, there's actually no difference at all.

What Do APR and Interest Rate Mean?

APR might stand for Annual Percentage Rate, but in practice, it includes both the installment loan's interest rate plus other charges such as points and fees.

An installment loan is one with a predefined number of payments which are to be paid according to a fixed schedule. Examples of installment loans include home mortgages, student loans, car loans and personal loans.

Your credit card may in fact have associated fees—such as annual fees or late payment fees—but credit card issuers don't include these in the APR, unlike installment loans.

How Do APR and Interest Rates Work for Installment Loans?

The term APR is meant to reflect the total cost to you of borrowing money, in the form of a percentage rate. These costs include loan origination, mortgage insurance and other fees, plus any "points" you may have to pay upfront in order to receive a lower interest rate.

By comparing the loan's APR to its interest rate, you can learn how much of your costs will be interest charges, and how much will be other fees.

For example, when you receive a loan estimate from a mortgage lender, the interest rate will be listed on the first page, under "Loan Terms," while the APR will be found on page three under "Comparisons."

Since car loans and other types of installment loans are not as highly regulated, you'll find this information in different places. For a car loan, the costs that are included in an APR and are often called prepaid financing charges.

How Do APR and Interest Rates Work for Credit Cards?

A credit card is a revolving line of credit, and there is no difference between a card's interest rate and its APR. These two terms are used interchangeably, but when you look up a credit card's terms, you'll see it expressed as an APR.

Every credit card issuer is required by law to display its cards terms and conditions in a standardized format, that's often called a "Schumer Box," after New York Senator Charles Schumer who is credited with enacting this requirement. 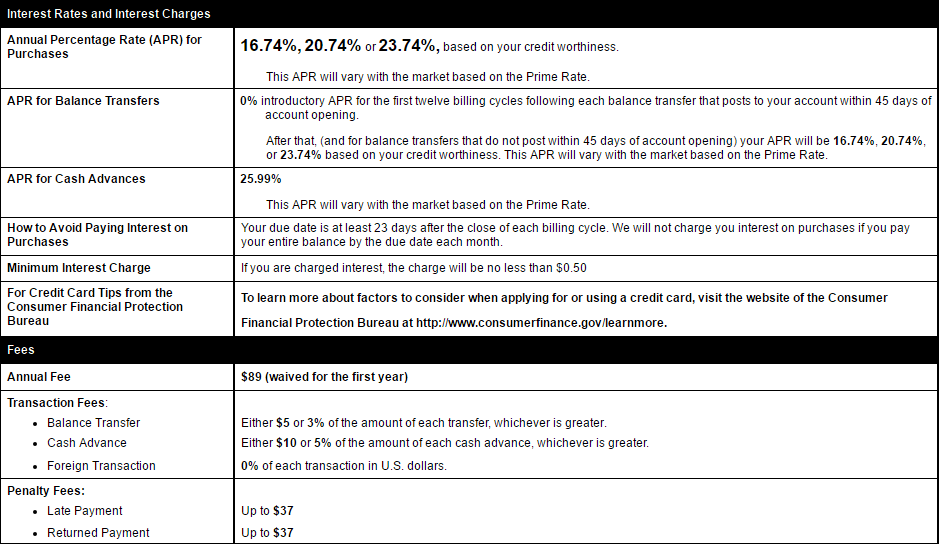 The Schumer Box essentially bypasses the nearly unreadable small print that card issuers use to document their terms, and mandates a standard size font and format that all card issuers must use to communicate the car's core terms. Here you'll notice that your credit card likely won't have a single interest rate, but several.

There's often a standard interest for purchases, one for balance transfers, and a separate one cash advances. Most cards also have a higher penalty interest rate for when you've made late payments. Furthermore, many cards will list several possible interest rates, or a range of rates. The rate you receive will be based on your creditworthiness when you applied for the card.

However, the Prime Rate is determined by the federal funds rate, which is set by the Federal Reserve's Open Market Committee. From December of 2008 to December of 2015, the Prime Rate held steady at 3.25%. Yet since then, it has been raised by a quarter of a point several times, including three times in 2017. Whenever the Prime Rate rises or falls, all U.S. credit cards with variable interest rates will increase or decrease by the same amount.

Keep more cash in your wallet with a low interest credit card. See what offers you qualify for based on your free FICO® Score.

What Is Interest and How Does It Work?

Is The Platinum Card® from American Express Worth the Annual Fee?

What Credit Cards Does Costco Accept?

What Is a Credit Card Cosigner and Should You Use One?

Best Credit Cards for a Road Trip in 2021

Keep more cash in your wallet with a low interest credit card.