The average FICO® Score* in the U.S. is 703 according to data from Experian from the second quarter of 2019. Many adults know their FICO® Scores, but not everyone understands how they compare against other Americans.

What Is the Average Credit Score by Age Group? 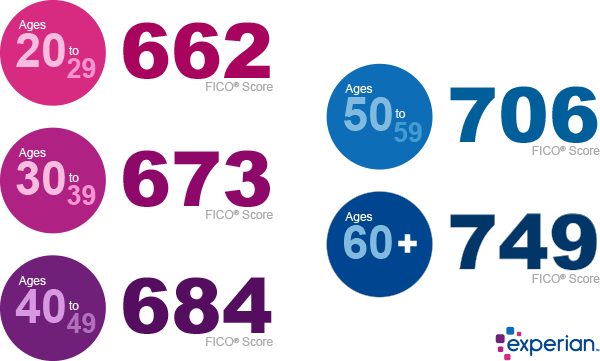 How Are Credit Scores Calculated?

FICO® Scores are calculated by evaluating the data in your credit file to determine how likely it is you will pay back your credit obligations. FICO® Scores consider major factors like your payment history, credit utilization, and age of credit history, among other criteria, in order to produce a number that reflects your creditworthiness.

FICO® Scores are based on five types of information found in your credit report:

Though these are the five factors used in determining a FICO® Score, it is important to remember that lenders often look at everything in a credit report along with other information on your credit application, such as your current debt-to-income ratio for example.

What Is Considered a Good Credit Score?

A credit score higher than 670 in the 300-850 scoring range is generally considered "good." A credit score of 800 or above on the same range is considered to be "exceptional." Higher scores generally indicate that you have made better credit decisions, thus making lenders more confident that you are likely to repay your future debts on time.

Meanwhile, the percent of Americans with average FICO® Scores below 550 has decreased one percentage point compared with 2018. Only 12% of the U.S. population has a FICO® Score that is less than 550 in the second quarter of 2019.

How Do You Improve Your Credit Scores?

Improving your FICO® Score can be very helpful before applying for a new line of credit like a credit card, mortgage, or personal loan, because a higher score can help you secure the best terms and interest rates available. Here are some actions that can help improve your FICO® Score over time:

Know your financial profile to understand what lenders see when they look at your credit report so you can make sure to get the best interest rates and terms.

How Much Should I Save for Retirement?

How to Deal With the Financial Aftermath of a Natural Disaster

What Is UltraFICO and How Do I Use It?

When Is a Credit File Created?

What to Know When Applying for a Business Loan

Does the Type of Credit Score Matter?

How to Build Good Credit in College