Have you heard about "synthetic" identity theft? If not, chances are you will.

Synthetic identity theft is the "fastest growing type of ID fraud," representing 80-to-85% of all current identity fraud, according to the U.S. Federal Trade Commission.

Keir Breitenfeld, identity fraud expert and senior business consultant with Experian, provides an insider's glimpse on synthetic identity theft in this Q&A with Ask Experian contributor Brian O'Connell. In addition, he outlines practical steps consumers can take to protect themselves from one of the most dangerous strains of ID fraud in years. 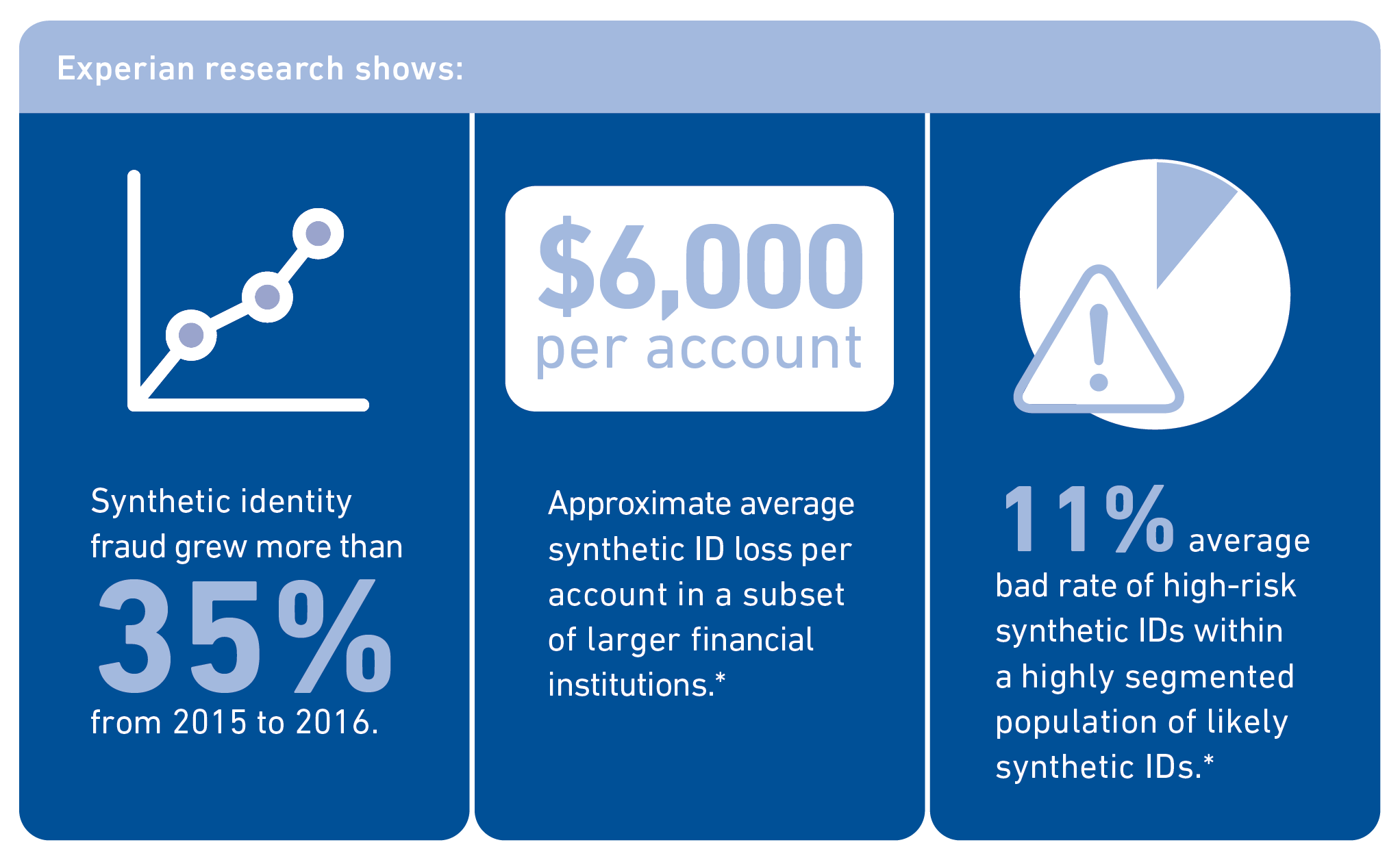 What is synthetic ID theft?

Breitenfeld: Synthetic ID theft is the creation of a fictitious identity using either fabricated or valid elements, such as a Social Security number, name, address, and date of birth. Much of this personal data is captured by fraudsters via data breaches and dark web marketplaces.

Synthetic ID fraud artists merge real and fake personal consumer data to create a fresh identity, which they can use to commit financial fraud. For instance, synthetic fraudsters can steal a Social Security number and create a new identity by merging that number with a different—but real—name, address and phone number. Once that task is accomplished, synthetic identity thieves can apply for and get credit cards, mobile devices, and other credit accounts. (See also: 3 Steps to Take If Your Social Security Number Is Stolen)

Unlike traditional "true-name" identity fraud, there is no actual victim or true identity behind this combination of identity elements, although a consumer may still possess a Social Security number that's being used in a synthetic identity theft scam.

How can consumers guard against a synthetic ID attack?

Breitenfeld: Consumers can use identity monitoring that includes dark web monitoring, which can help identify individual identity elements, such as a Social Security number, that are targeted by synthetic identity thieves. (Check out Experian IdentityWorks with dark web monitoring and learn more about the dark web here.)

What should a person do if he or she has been victimized by synthetic ID theft?

Breitenfeld: Contact the authorities, including law enforcement, and let your financial institutions know you've been victimized by a synthetic fraud breach. Also, monitor your credit report for any discrepancies following the breach, and freeze your credit, if necessary, if authorities determine the synthetic ID theft occurrence was a severe one. (See also: What's the Difference Between a Credit Freeze and a Fraud Alert?)

Experian: Any other key takeaways on synthetic identity theft for consumers to keep in mind?

Breitenfeld: One of the factors that make synthetic IDs difficult to combat is that it's thought of as a "victimless" crime. When a synthetic ID is used, no single individual is going to be alerted to charges on their account, because the account holder isn't a real person. Instead, it's the institution "providing services" to the synthetic identity that is the initial victim.

Of grave concern, however, is the fact that minors who may legitimately be issued Social Security numbers that are being used to build synthetic identities will find life as an adult much more challenging, and by default will be victims at some point. (See also: Do You Know How to Protect Your Child From Identity Theft?)

As these individuals become adults who use credit, they will find themselves subjected to heavy risk-based suspicion and a lack of positive and trusted verification for the acquisition of various services, particularly online and mobile—all due to incidents of synthetic identity theft.

What are banks and credit card providers doing to combat synthetic ID theft?

Breitenfeld: Increasingly, financial institutions are using advanced analytics, identity element monitoring, and device intelligence to combat synthetic identity. Those institutions that understand the risks of synthetic theft—and the tools that best thwart such attacks—and who work with service providers like Experian who offers these solutions are better equipped than institutions that use more traditional identity verification techniques.

The challenge lies in the ability for financial institutions to detect and prevent synthetic ID fraud. These fictitious identities, once created and cultivated over time, become ‘verifiable' and therefore often pass traditional identity checks. Financial institutions must continue to use more sophisticated analytics supported by big data assets to isolate synthetic identities from the vast majority of good or true name consumer identities.

For example, on behalf of our clients, Experian deploys robust link analysis that monitors the use of identity elements such as name and Social Security numbers over time. We are able to detect when identity elements look to be used inconsistently or at high velocities, often leading indicators of larger identity compromises. Additionally, we utilize device intelligence to monitor common access points through which more organized fraud schemes may be occurring.

Protect the Data That Defines You

With identity theft increasing year over year, you need 360° alerts and world-class features to help you protect yourself.

How to Add a Phone Number to a Temporary Fraud Alert

The Many Different Forms of Identity Theft

7 Steps to Fight Back Against Identity Theft

If Your Child Has a Credit Report, Watch Out for This