Borrowers in the U.S. currently owe more than $1.4 trillion in outstanding student loan debt, and not all of it is being paid back. In fact, only a little more than half of federally managed student loans are currently in repayment, according to data from the U.S. Department of Education (DOE).

That leaves the remaining outstanding debt in various states of limbo, such as forbearance, deferment, grace period or default. These repayment alternatives (except default) serve as exit ramps for borrowers who are unable to pay back their debt, but intend to in the future.

In the past year, as overall student loan debt in the U.S. has grown, so too has the proportion of debt that's being postponed by borrowers. As part of Experian's ongoing look at student loan debt, we analyzed consumer credit data and data from the DOE to see how borrowers are managing this debt. Read on for our insights and analysis. 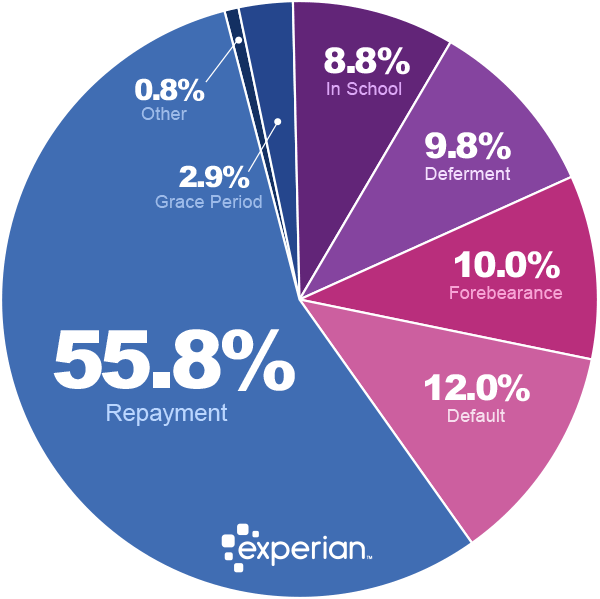 Only About Half of Outstanding Student Loans Are in Repayment

Loans are considered in repayment when accounts are active and payments are being made. In the third quarter of 2018, just 53% of the balances were in repayment.

The total of all student loan debt—including public and private loans—is over $1.4 trillion, according to Experian. Consumers carried an average of $35,620 in student loan debt as of the second quarter of 2019.

*Source: Experian data. All data from Q2 of each year.

Of the debt that isn't currently being paid back, more of it is being put in forbearance. Forbearance is a method borrowers can use to delay repayment of federal student loans due to financial hardship. Forbearance relief must be applied for and is granted based on a borrower's financial situation. Loans in forbearance still accrue interest.

A total of $129 billion (10%) of the outstanding student loan debt is currently in forbearance, according to data from the DOE. That figure has grown in the past two years, increasing two percentage points since 2017.

Deferment is similar to forbearance—it's a way to temporarily suspend payments due to financial hardship. While in deferment, however, borrowers may not have to pay interest that accrues on certain types of loans.

The total amount of student loan debt currently in deferment is $127 billion (9.8%), according to DOE data. This amount is down one percentage point from Q3 2017.

A federal student loan is considered delinquent the first day after a borrower misses a payment. If a loan continues to be delinquent, the DOE considers the loan in default. The timeline for designating a loan in default varies depending on the type of loan the borrower has.

When compared with the number of delinquencies across all credit products in the U.S.—which in the past five years have gone down—the increasing amount of student loan debt in default is notable.

Grace Period and In-School Round Out Non-Repayment Loan Numbers

The remaining outstanding loans not currently in repayment are spread between borrowers who are still in school and those in their grace period—the period of time after school when borrowers are not yet required to pay back their loans.

A total of $114 billion (9%) in student loans were held by borrowers currently enrolled in school. Another 3% of outstanding student debt—$37 billion—is held by borrowers in a grace period, according to data from the U.S. Department of Education.

Alternatives to Payment Can Be Helpful, but Should Be Avoided

While alternatives to student loan repayment can be helpful in dire situations, it's best in the long term if borrowers can find a way to pay their loans without taking any time off. Particularly with defaulting or putting loans in forbearance, the consequences can be costly.

During forbearance, borrowers can rack up thousands of dollars in interest while not paying anything toward the loan principal. For some loans, deferment can also mean racking up interest.

The approval processes for these two payment alternatives differ, and depending on the type of deferment or forbearance, so do the applications and documentation. Borrowers interested in learning more about deferment and forbearance can visit the DOE's Federal Student Aid website. To get more information about applying for either payment alternative, they can contact their loan servicer.

When it comes to default, missing payments and owing creditors should be an absolute last option. Missed payments are reported to credit bureaus and can have a serious impact on credit scores. Borrowers who are in default or have missed payments in the past should get a free copy of their credit reports and credit scores from Experian to see how the delinquency has affected their scores.

Use Experian Boost® to get credit for the bills you already pay like utilities, mobile phone, video streaming services and now rent.

6 Reasons Not to Pay Off Your Mortgage Early

What Is a Debt Consolidation Loan?

What Are the Long-Term Effects of Debt?

Pros and Cons of Debt Consolidation

Congrats! You got a boost.
Start your boost