Alternative fuel vehicles aren’t a new concept, but they have certainly been gaining momentum in recent years, as manufacturers introduce new models and costs decrease.

What are the finance implications of the shifting marketplace for alternative fuels? In the Q4 2020 State of the Automotive Finance Market report, we zoomed in on the alternative fuel financing to get a better picture. Here are some of the trends we found.

Electric vehicles have the highest average credit scores for financing

Similar to what we’ve seen with average credit scores for new car loans, the average scores for new alternative fuel vehicles have mostly seen steady increases in the last few years. As of Q4 2020, the highest is for electric vehicles, at 763, followed by hybrid (756), and gasoline/flex (731).

Toyota and Tesla are the most popular make and model 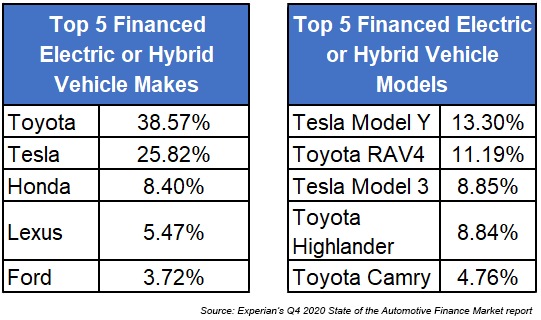 As manufacturers continue to introduce new electric and hybrid models, it is likely that the alternative fuel market will continue to grow in finance market share. By staying close to the data, lenders and dealers can make the most strategic decisions to navigate the ever-changing market in the years to come.

Many financial institutions have made inclusion a strategic priority to expand their reach and help more U.S. consumers access...

As more consumers apply for credit and increase their spending1, lenders and financial institutions have an opportunity to expand...