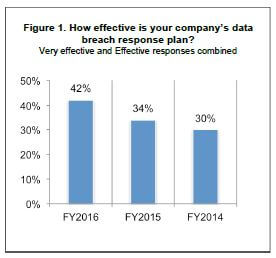 Since 2013, we have been tracking and identifying important trends in how organizations are planning for and responding to data breaches. Each year the number of companies experiencing a data breach increases. In this year’s study, 52 percent of companies represented in this study had a breach, an increase from 49 percent last year, and 66 percent of respondents say their organization had multiple breaches.

Of the 86 percent of respondents who say their company has a data breach plan, 42 percent say it is very effective or effective, as shown in Figure 1. While this is a significant increase since 2014, it is not enough. Given the financial and reputational consequences of a data breach it is in the interest of companies to improve their plans.

In this year’s study, we surveyed 619 executives and staff employees who work primarily in privacy, compliance and IT security in the United States.

Fill out the form below and download the document now.

Thank you for downloading

You may receive occassional communications from Experian Data Breach Resolution.

Oops! We were not able to submit your data. Please try again later.