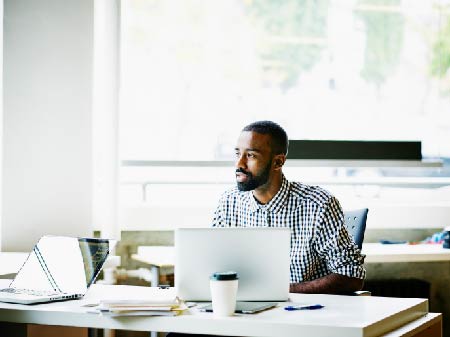 Unemployment Insurance (UI) is a form of social insurance, with contributions paid by employers on behalf of employees so they have income support if they lose their jobs. The basic UI program in most states provides up to 26 weeks of unemployment benefits to unemployed workers, replacing about half of their previous wages, up to a maximum benefit amount.

Unemployment benefits first started in 1935 during the Great Depression as a part of President Franklin D. Roosevelt’s New Deal. At the time, the United States was the only developed nation in the world that did not offer any welfare benefits.

There are no federal standards for unemployment benefits in terms of monetary qualifying requirements, benefit amounts, or duration of regular benefits. As a result, states have developed diverse and complex formulas for determining employees’ unemployment benefit rights.

An individual’s benefit rights are determined using wages and employment during a period of time called the base period. While base periods vary among states, they generally cover a historical period of the most recent four consecutive completed calendar quarters. Unemployment benefits are paid during a period of time called the benefit year. Individuals who exhaust their benefits before the end of a benefit year must wait until a new benefit year is established before they can again qualify to receive unemployment benefits.

Amount of 2022 Unemployment Benefits in the US States

Each US state has its own unemployment insurance program, including ones in the District of Columbia, Puerto Rico, and the United States Virgin Islands. The majority offer unemployment benefits for up to 26 weeks.

Amounts of 2022 unemployment benefits that can be received in different states are:

Unemployment benefits serve as financial protection when employees lose their jobs due to circumstances outside their control. However, a number of states are considering changes to unemployment programs.

Lawmakers in at least nine states have considered legislation to amend unemployment programs, including a decrease in the duration of 2022 unemployment benefits or lower weekly benefits to the unemployed. In Kentucky, a measure that became law in March reduces the maximum length of unemployment benefits by more than half. As a result, unemployed workers in this state will only be eligible for up to 12 weeks of benefits.

On the other hand, pending legislation in Missouri would cut the duration of 2022 unemployment benefits from 20 weeks to eight weeks if approved. Similar bills are pending in Louisiana, New Hampshire, Iowa, Wisconsin, and Oklahoma.

State lawmakers who support amendments to unemployment programs believe that these policy changes will get recipients back to work more quickly at a time when there are more unemployed individuals than job openings nationally.

Unemployment benefits are funded by Federal Unemployment Tax Act (FUTA) and State Unemployment Tax Act (SUTA) taxes paid by employers. FUTA tax amounts to 6% of the first $7,000 that each employee earns per calendar year, for a maximum annual contribution of $420 per employee. In some cases, employers may be eligible to receive some of those payments back via a tax credit.

If eligible employees file for and are approved for unemployment benefits, employers can experience higher SUTA tax rates. SUTA taxes are generally calculated based on the employer’s size, the amount an employer pays in wages, and the number of unemployment benefits collected by former employees. All of these factors contribute to the experience rating that establishes the tax rate. If a business lowers the number of successful unemployment claims, then its SUTA rate will decrease as well.

Unemployment benefits are an inescapable part of running any business, but responding to them can be complex and time-consuming. However, employers can take specific steps to simplify this process while reducing the risk, cost, and burden of managing 2022 unemployment benefits. Outsourcing unemployment benefit management ensures timely and detailed responses to state inquiries and support with every aspect of processing claims and hearing representation, allowing employers to achieve both improved compliance and significant cost savings.

Learn more about Form 940 and how to file with an accurate calculation of payroll tax for both federal and state authorities.