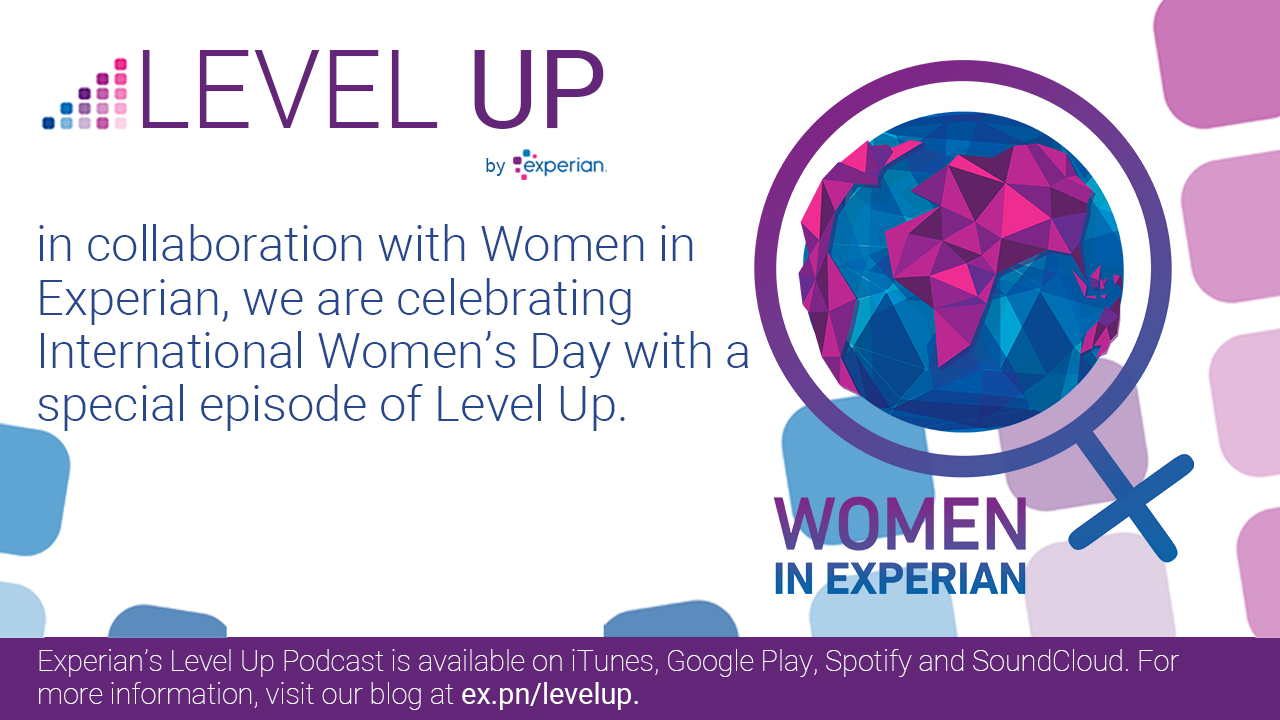 For this episode, we collaborated with Experian’s employee resource group, Women in Experian (WiE) to celebrate International Women’s Day. International Women’s Day falls on March 8 every year and is a global day celebrating the social, economic, cultural and political achievements of women. The day also marks a call to action for accelerating gender parity and has been celebrated since 1911. In this episode, we feature various leaders from different backgrounds and their thoughts surrounding diversity and inclusion as it pertains to women in the workplace.

Here are a few of the topics our leaders touched on in this episode:

Jennifer Schulz
Group President of Health, Automotive, Data Quality and Targeting for Experian North America and Global Lead Ambassador for WiE
During her interview, Jennifer talked to us about the idea that advocacy for gender balance does not mean favoring women over men; rather, that when we have true diversity in the workplace, business booms.

Merideth Wilson
SVP and General Manager of Revenue Cycle Solutions at Experian Health and North America Lead Ambassador for WiE
Merideth gave us her thoughts about why women should not wait to be noticed and why they should be the first to raise their hands and do the things no one else wants to. Listen to Merideth’s Level Up episode here.

Beth Wheat
VP of Global IT Transformation and EITS Ambassador for WiE
Beth tells us about her philosophy with “defending the underdog” and how that has impacted her leadership and the way she navigates diversity and inclusion in the workplace.

Lauren Gomez
VP of Human Resources for Experian LatAm and the LatAM Ambassador for WiE
Lauren talks to us about what it’s like to manage offices in five different countries and the obstacles she faces when some cultures are more conservative than others when it comes to diversity and inclusion.

Dev Dhiman
Managing Director for Experian South East Asia and Emerging Markets and the APAC Ambassador for WiE
Dev reminds listeners about the importance of men’s involvement in women’s advocacy and why it benefits all when there is true gender balance.

Robert Boxberger
President of Experian Data Analytics and active WiE member and ally
Robert reminisces a time when his daughter faced gender discrimination and the lessons he was able to teach his children in the process of helping her speak up for herself. Listen to Robert’s Level Up episode here.

David Proctor
President of Experian Partner Solutions and active WiE member and ally
David contemplates the varying importance of diversity and inclusion across organizations, fields and industries and ways leaders can continue to elevate the importance of it in the workplace. Listen to David’s Level Up episode here.

Dacy Yee
Chief Customer Officer at Experian Consumer Services and ECS Ambassador for WiE
Dacy talks to us about how her experience in children’s advocacy and women’s law has equipped her to be the best leaders she can possible be today. Listen to Dacy’s Level Up episode here.

Hiq Lee
President of Experian Business Information Solutions and BIS Ambassador for WiE
Hiq tells us what it was like being the only woman of color who had a seat at the table early on in her career and how she thinks we can all be better allies to each other. Listen to Hiq’s Level Up episode here.

Kendra Scott
CEO, Designer and Philanthropist
Kendra talks to WiE about the ways women empowerment has changed her life and how it continues to make an impact on her business. To listen to the full episode, click here.

Ann Miura-Ko
Co-founder of venture capital firm Floodgate and a repeat member of the Forbes Midas List
Ann talks to WiE about what she did to combat her impostor syndrome and how learning how to raise her hand first early on in her career has earned her a seat at the table. To listen to the full episode, click here.

We were happy to be able to create this special episode in collaboration with Women in Experian.