Anatomy of a Redesign – BusinessIQ 2.0 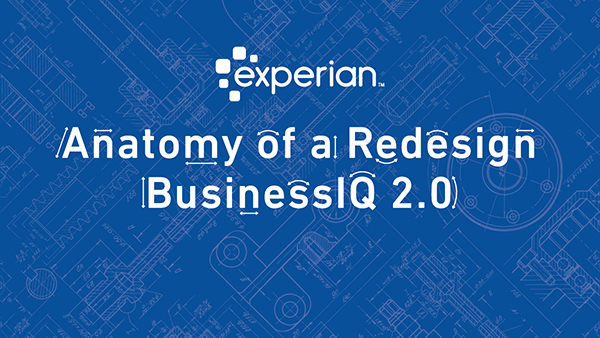 This year, Experian business information services released some major enhancements to our BusinessIQ product. The project was completed by a highly skilled team here at Experian and heavily driven by customer feedback. Today we’ll speak with Casey Hald. one of our lead software developers as he takes us through some of the enhancements to BusinessIQ.

The transcription of our interview with Casey has been lightly edited to improve readability.

What was the main goal of this redesign on BusinessIQ?

CH: The goal of the redesign project was to not only improve BIQ user experience and design but also update the overall framework as well.  We wanted to bring BIQ into 2020 strong and  I feel like we did that.

Maybe you could talk a little bit about how that process worked in this case.

CH: So first I dug up the existing research material when BIQ was first being developed and used that as sort of a baseline for what BusinessIQ is all about. Since coming into Experian, I was brand new to the credit space. So having that research material was very important to me to have empathy for our users. So,  I was lucky that in the first month of joining the team I traveling across the U.S. visiting our biggest clients,  well both big and small and mom and pop companies and basically discovering why they use BIQ and you know, why it was important to them.

So, they sent you out on the road to meet face to face. It wasn’t just a conference calls?

CH: Yeah, face to face. So we went from the West Coast to the Midwest, to the East coast and we visited companies, big and small. It was a treat. It was over 27 different participants across 16 different companies. So we got to talk to a lot of people.

What were their struggles with BusinessIQ?

CH: Yeah, so they love BusinessIQ for the speed and accuracy of pulling credit reports.  They choose us over our competitors because of that speed. So we wanted to make sure that with this redesign that wasn’t compromised at all. And that was something that they love with the existing design. However, with the existing design, unless you are already privy to how BusinessIQ is structured, a new credit analyst coming into this pace could be somewhat confused. So we used that as sort of a baseline to decide how we wanted the redesign to go.

CH: So the first thing we did was we simplified the forgot password workflow. A lot of the challenges that our customers ran into was updating their credentials, managing their credentials. With BusinessIQ, it’s security first. So we require that they log in. They can’t just log in and walk away, the system will just be open for people to compromise security. It refreshes every 15, 20 minutes, so sometimes they forget to log in. So we wanted to simplify that workflow by adding a remember me functionality. So that way they can plug in their credentials and can log in. We also modified the look and feel and the design to a more modern look and feel.

And so that would involve what the site navigation?

CH: Yeah, the sign navigation. With that we updated the layout, moving it to the side to more of a modern dashboard, which you see a lot of times with modern applications. They have navigation right here and then the content takes up the majority of the space, which is something that we wanted.  We removed search from the navigation since,  it’s now in the header searches, the meat, and potatoes of BusinessIQ. What our customers use and love is search. So we wanted to take that out of the body, and give that its own container and put that right above the navigation. So it’s something that becomes the focal point of the application. We also reordered the search elements based on the order of importance based on customer feedback. So it’s not just alphanumeric. We reordered it based on the importance of what we learned from our users.

What about pulling reports? Because I mean, our customers love to pull reports and they pull a lot of them, right?

CH: Absolutely. So, when they pull the reports, it’s arguably the most important workflow to BusinessIQ. They use BusinessIQ to view a credit report. So if a customer wanted to pull a new report in the old design, they would need to first search a company, view an old report, click on pull report, and then view the report configuration options, which aren’t exactly super organized, and then click to view the report. So with the new design, the user searches a company views the company information alongside the report configuration options and then clicks on the report. So we’ve lessened the number of clicks by one or two and organized it to a step by step process. So a new credit analyst coming into space doesn’t get confused about what configurations he or she needs to make. The old design requires potentially 26 form inputs while the new design contains only six. Our goal made pulling a report easier by making the configuration options into a series of steps,  as opposed to just a random configuration.

What are the other big improvements? Did you do anything in credit configuration?

CH: Yeah. So 85% of our users stated that they never changed the report type because they simply didn’t understand what each report type contained. They didn’t understand the benefits of a Premiere Profile versus a business report. So we added a summary for each report type. So any new credit analysts that come in, they can simply read the summary and understand what each report type means to them, and why they need to pull it. Since users often pull the same report, we added a separate card for past pulled reports. So it uses a one-two, three-step approach, making it super easy for a new user to use. And there’s only one call out with all the options already default selected. So there are a lot fewer form inputs.

So this has got to be saving our customers a ton of time. Right? It’s all about productivity and making your business more efficient. Is that really how those improvements have been received?

CH: Totally, and a lot of our credit analysts, when they use BusinessIQ, they’re in and out in five minutes. They go in, search a company, pull a report, log out, get on with the rest of their workday. So we wanted to keep that, you know, save their time because time is the most important asset you have right? So we wanted to make sure that that was first and foremost.

CH: Absolutely. So we added a quick search filter to find exactly the report you’re looking for. For a new credit analyst, we rolled up all the filters into a simple selector delimited by date.  So they always see the freshest report at the top, which is super important.  The user now has control over how many reports that they can view at once with our new paginated system,  which is utilizing Google materials design documentation. So we took kind of what they learned,  through their research and utilize that into our cards and components as well.  The business name is now the focal point instead of the date, which is super important. And we removed the reference code as it wasn’t being used among users. It was a big sequence of numbers that kind of got in the way. And one of the goals of our redesign is to cut away the things that our users don’t use and create focal points for the things that were most important to them.  So that’s how we improved managing reports.

What has the response from our clients been?

CH:  luckily for me and my job, they love it.  they love the new visual direction. They say that it’s pretty, which is a compliment. But they also say that it is much easier for them to use.  One of the things that we improved,  in terms of cutting things away was that the old dashboard contained 10 to 15 different cards with newsreels tasks, some charts,  portfolio charts, things that our customers didn’t necessarily use first and foremost on the dashboard. They kind of just went straight to search. And when I asked them if you had a Wishlist on what you would like to see on the dashboard, what would it be? And the first thing that they said was recent reports. If you could put recent reports at the top, so that way I can always see the last report that I pulled. So I don’t make a mistake of pulling that same report. That would be lovely. So,  that was one of the major things that we did. And we’re seeing a lot of positive feedback,  from just that simple improvement alone,  let alone the other improvements that we’ve made. So,  the reports have been positive and we’re continuing to keep our ears open.  We have a lot of empathy for our users and the way that they use BusinessIQ.  So we’re going to continue to listen to them and, and continue to iterate on the design since the design is a very fluid solution, right? Design changes over time. So we’re keeping that first and foremost for our users.

What was your biggest learning?

CH:  So the thing that I learned the most was how quickly our customers use the application. They go in, they search, find what they’re looking for, they use it as a confirmation of address and phone number. For our credit analysts, the phone number is super important alongside address information when they’re pulling a credit report. Since a lot of companies have ambiguous locations that could look like one another. So I learned that differentiating those elements was super important to them. It actually sped up their workflow. So we use that in conjunction with some of the other design decisions that we made to improve the overall user experience. So for me, being in the credit space and having the opportunity to redesign the experience I really learned from our users, that has been a privilege.