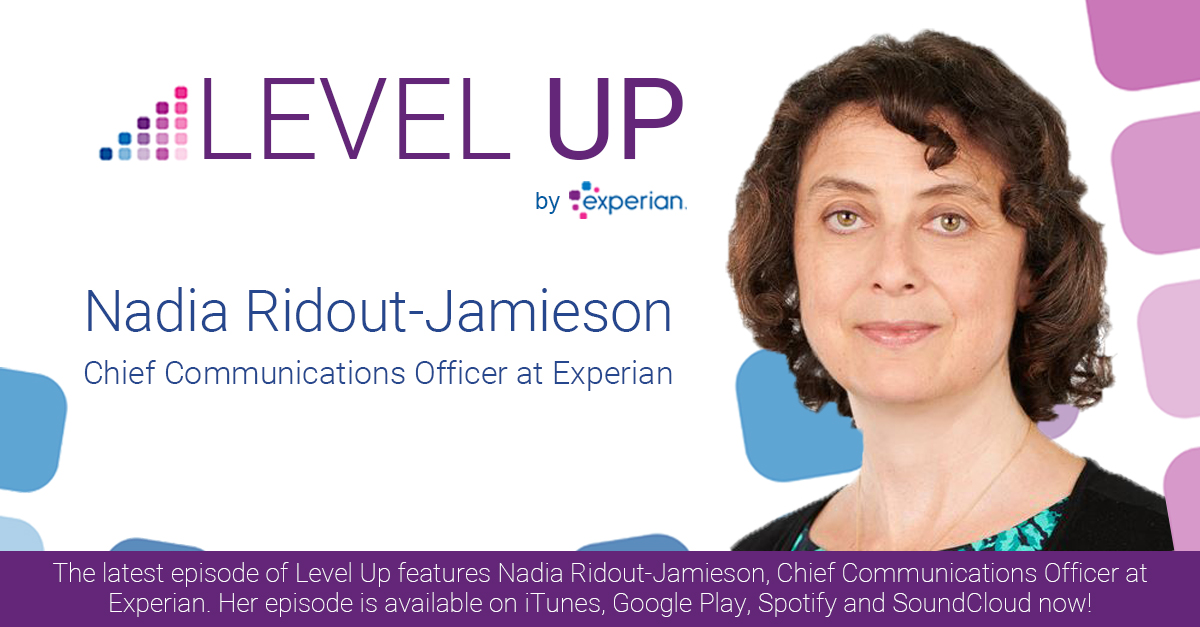 Most recently, we spoke with Nadia Ridout-Jamieson, Chief Communications Officer at Experian. Nadia is responsible for investor relations, internal and external relations, corporate communications and management of the Experian brand. Before Experian, Nadia spent ten years in the investment banking industry. She was a sell-side media analyst covering stocks in the marketing services, professional publishing and consumer media industries, starting her career at Cazenove, before moving on to Lehman Brothers. She studied chemistry at the University of Wales, College of Cardiff, and holds a PhD in surface science from Cambridge University.

Here are a few takeaways from our discussion with Nadia:

Sometimes leadership comes spontaneously.
Like Nadia said, “You start off as an expert in something, your team grows, all of a sudden you’re managing people, then somebody adds on another responsibility and then another and suddenly, you’re managing a function.” Although you may not have always wanted to be a leader, sometimes it just happens!

Mentorships don’t have to be formal.
Some of the best things Nadia learned in her career came from slight comments or tips to get seeds planted. You don’t always have to formally ask someone to be your mentor; sometimes it’s as easy as being shown the better way to do something or receiving advice during a difficult time.

The culture of your organization has a large effect on your work.
Nadia mentioned after working at Experian, she knows organizational culture is something she would pay a lot more attention to if she were to ever work anywhere else. Because Experian’s supportive and collaborative culture was a stark contrast to other companies, Nadia knows that the culture you surround yourself with is important, and a great environment is the responsibility of all leaders.

Soft recognition is important too.
You may not always be able to give your team formal recognition for their achievements, but Nadia points out it’s important to give them what she calls soft recognition, which empowers and helps people take credit and be applauded for the work they do. When you’re a leader, encouraging your team is key to keeping morale up.

Leadership is not about a boss and an employee.
New leaders may take some time to realize this, but forceful leadership is counterproductive. “I’m the boss and you have to listen to what I say” is no way to lead a team. Leadership is about getting a group of people together and using your skills and abilities to move that group toward a common goal.

You don’t have to be friends.
Sometimes, we get caught up in the idea that your coworkers are your “work family” and that everyone should be close-knit and compatible. Unfortunately, that won’t always be the case. Great workers will recognize that some people will never be your friend but that doesn’t mean they don’t add tremendous value to projects. You don’t have to be friends, but there has to be a level of respect.

We were so happy to have the opportunity to chat with Nadia for Level Up.