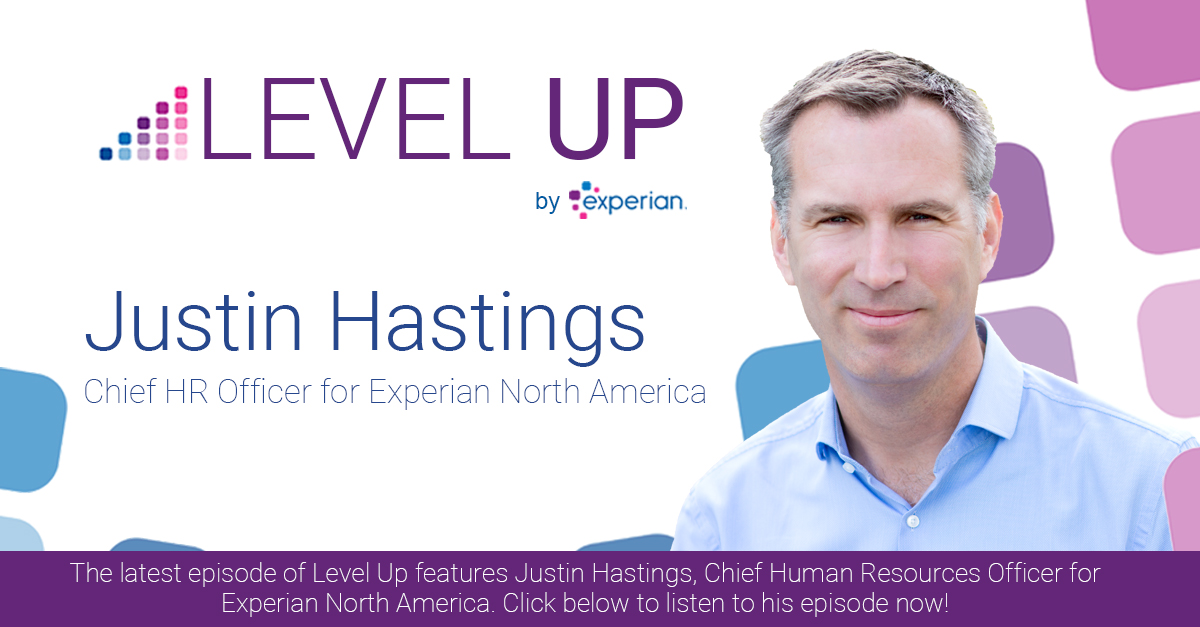 You can subscribe to the Level Up Leadership podcast on iTunes, Google Play, SoundCloud and Spotify.

Most recently, we spoke with Justin Hastings, Chief Human Resources Officer of Experian North America. Justin has driven a focus on “ offense and defense” into the region’s talent practices, building improved insight into external and competitor talent, while focusing on Experian’s must-keep talent. While Justin has been CHRO, regretted attrition has reduced from 17% to 10% since the end of 2015, and high performer attrition has reduced to less than 6%.

Here are a few takeaways from our discussion with Justin:

Your “a-ha!” moment doesn’t have to come to you right away.
Justin’s “Road to Damascus type moment”—as he likes to call it—didn’t come until about 8 years into his career when he moved from roles that involved marketing, product management and business strategy into an HR position. This was the first time he thought, “I think I can be pretty good at this and I really enjoy it. Maybe this is what I should do for the rest of my career.” Your own a-ha doesn’t need to come immediately. Take your time trying what you like and it will come to you.

Take the risk and be flexible.
Most of the things Justin tried in his career were not necessarily planned or preordained; he always maintained a flexible view and tried different things. He also took a risk pivoting his career into HR with no background in it, but he supplemented that with good judgment, sensible decision-making and strong intellect. Taking the risk might be scary, especially if you don’t feel qualified, but your skills and experience can always help you learn more.

Do what you can to help yourself.
Justin may have gone into HR with no background in it, but as soon as he recognized that it was something he wanted to do for the rest of his life, he set out to get the proper academic qualification and he completed a master’s program in HR. “Helping yourself” will look different to everyone. Maybe it isn’t a masters; maybe it’s a class at the local community college, maybe it’s networking with others in your industry, maybe it’s seeking a mentor­—whatever it is, do what you can to help yourself get ahead.

Expand your horizon.
Most of the time, it isn’t enough to just sit at your desk and do your job. It’s important to get involved in special projects outside of your core job to help expand your knowledge and experience. As Justin said: “Be a really good practitioner of what you do, but always learn and do more on the side as well.” Here are a few ways you can branch out right now:

Your attitude and aptitude to progress and learn is everything.
You can always learn the technical skills that are demanded of your job, but the way you present yourself in the workplace and your willingness to learn says more about you than anything else. Often times, leaders would much rather see somebody who is demonstrating their potential and translating that into performance than someone with a resume packed with technical skills anyone can learn.

Create meaning and purpose.
During Justin’s time as CHRO, high performer attrition dropped drastically. It’s plain to see that Experian is a company people want to work for, and that’s largely in part to feeling like their job is truly helping to create a better tomorrow. As a leader, it’s important to remind the people you manage what the meaning and purpose behind their job is—after all, we all enjoy our jobs more when we know we are making a difference.

Remember to elevate yourself and your visibility.
Like Justin pointed out, no one is going to nurture and care about your career the way you do. Your leaders and HR professionals may help and assist where they can, but your career will not be their core focus the way it is for you. Remember to always find ways to elevate yourself, increase your momentum and work on your visibility within the company.

We were so happy to have the opportunity to chat with Justin for Level Up.