Women flexing their financial muscles; women’s credit is in better shape than men’s credit according to Experian

When it comes to credit, who is winning the battle between men and women? The latest credit trends study, released today from global information services company Experian, compares the financial differences between men and women, revealing that, overall, women are better at managing their money and debt.

Below is a top-line look at how men and women fared when compared with each other:

“When looking closer at our data and cross-referencing it with other data sources, we see that women working full-time in the United States earn approximately 23 percent less income3 than men but that women are taking steps to manage their finances better than men,” said Michele Raneri, vice president of analytics, Experian. “The most notable difference is that men are taking bigger individual mortgage loans than women, but it would appear that they are having a slightly more difficult time making those payments on time.”

Mortgage insights
Some of the most compelling differences in the study were found in the mortgage category.
On average, 72 percent of consumers have joint mortgages (a home loan given to more than one party) and the remaining number represents men and women who borrowed on an individual/independent basis. The data reveals that throughout the United States, men have 18.3 percent more independent mortgages than women, with one exception: Women in Washington, D.C., take out 33 percent more loans than men.

See below for a closer look at the states with most and least independent mortgages by gender. 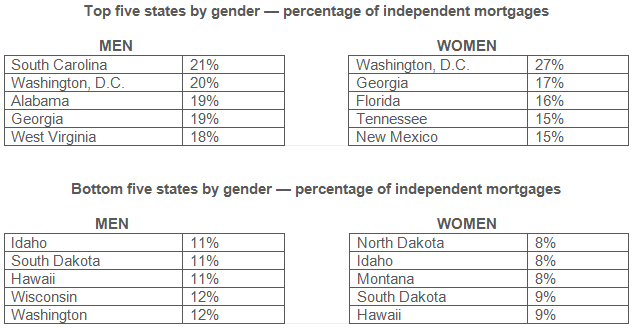 With men having more individual mortgages and higher loan amounts when compared with women, where are the most interesting trends when it comes to their loans and financial health?

“Seeing the divide between how men and women approach credit is interesting, but what’s most important is understanding the value of building a good credit history. How you manage credit and debt is critical to your financial well-being,” said Maxine Sweet, Experian vice president of public education. “Paying attention to what’s in your credit report, never missing a payment, and keeping your utilization rates low are three key steps to financial success.”

Analysis methodology
The analysis is based on a statistically relevant, sampling of depersonalized data of Experian’s consumer credit database from December 2012. Gender information was obtained from Experian Marketing Services.