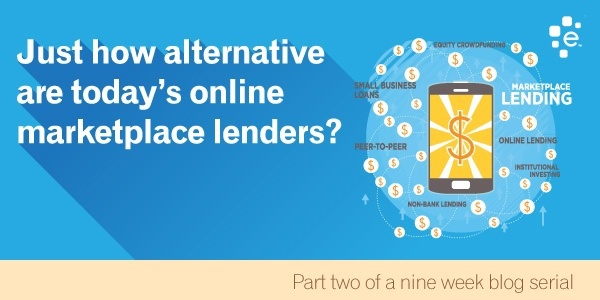 The phrase “man bites dog” is an aphorism in journalism that describes how an unusual, infrequent event (such as a man biting a dog) is more likely to be reported as news than an ordinary occurrence with similar consequences, such as a dog biting a man. In other words, an event is considered more newsworthy if there is something unusual about it.

Thus, the headline above likely will draw more attention than the same story with the headline “Hedge fund offers to refinance consumer loans for 7 percent APR.” While both parties might actually own a portion of the same loan portfolio in today’s “sharing economy,” known in financial services as “peer-to-peer lending,” this kind of loan is one of many that have evolved on the Internet under the new financial industry sector labeled “marketplace lending.”

Online marketplace lenders, funders, and investors have caused quite a stir over the past couple of years by offering alternative financing products and platforms to serve consumers and businesses that may have trouble securing a loan from traditional financial services, i.e., banks. But what’s so radically different about what they do, other than using a Website rather than a drive-up branch to initiate a financial relationship?

After all, don’t both extend money to another party with strings attached — that is, conditions about who gets the money, how much and when they promise to repay it, as well as the consequences if they don’t? It seems like a better “alternative” would be to simply win the lottery!

In fact, there is plenty of “alternative” in alternative lending, and in a relatively short period of time, the results have been phenomenal for consumers and businesses alike.

For starters, the submission process for loan applications varies greatly. Due to supervisory oversight of the industry and a conservative lending culture, applying for a bank loan often means that a more complete disclosure of personal and business information is required. The aftereffects of the Great Recession and housing bubble meant that many banks curtailed most lending altogether until their balance sheets recovered,

On the flip side, online lenders process applications with very little information —generally about 40 data points. This is because these lenders leverage the information and often ask for a borrower’s authorization to gain access to the cloud, where they can acquire more data on a borrower. Furthermore, online lenders have a narrow focus on where they are willing to lend money, so their decision analytics focus more precisely on a smaller set of information that really determines the risk for that particular type of loan.

This leads us to how online lenders make credit decisions. Most use proprietary algorithms that weigh various data collected from a borrower’s application and reach a decision based on the numerical score produced at that time. There’s little human intervention to sway the verdict positively or negatively since the decision matrix was developed by testing millions of blind data files with historical loan outcomes to measure and manage their exposure to credit loss.

There are plenty more differences in the online lenders’ approach, but probably none more important than the customer experience.

Online loan applications can be submitted 24-7, and a borrower will be “conditionally qualified” or declined usually within minutes. Final credit approval often comes within a couple of hours, and funding might be in 48 to 72 hours.

How can they do it?

1) These companies are driven by innovation, with technology used to address many aspects that we don’t like about traditional lending;

2) Online lenders are not banks, and as such, they are relatively free of the regulation that comes with accepting public deposits to fund their operations; and

3) By focusing on a smaller niche of prospective borrowers, online lenders don’t try to be everything to everybody but rather specialize to serve a smaller set of clients better.

4) These companies have developed niche products to satisfy the particular needs of each market.

What happens next? Is the end of commercial banks as we know them at hand?

No. While the rise of online marketplace lending has been meteoric and the industry climbed to an admirable $9 billion of funding in 2014, it is a very small portion of the trillions of dollars funded by traditional banking today. Still, what they do is attract plenty of attention in the trade.

Expect to hear more about strategic partnerships, acquisitions, and other flattering forms of imitation, as the banking industry will adopt and adapt many of the inspiring improvements brought by the online marketplace lending sector. Both sides will win, but the real prize goes to consumers and small-business owners who will have a more robust and competitive environment to get financing capital in the years ahead.

About Charles H. Green
Charles is Managing Director of Small Business Finance Institute, which provides professional training to commercial lenders for banks and nonbanks. He has written extensively about the marketplace lending sector, including the recent Banker’s Guide to New Small Business Finance (John Wiley & Sons, 2014). Earlier in his career, he founded and served as President/CEO of Sunrise Bank of Atlanta.
Related articles