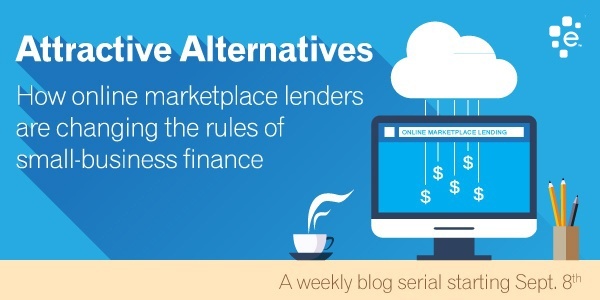 Disruptive technology has radically changed how we shop, socialize, book vacation rentals — and even how we hail a cab. Now we have another Web-based disrupter upending yet one more venerable American institution: how we secure small-business loans.

Over the past two to three years, online marketplace lending (OML) — also called alternative lending — has made dramatic changes in the landscape of financing businesses. Companies like OnDeck, Kabbage, Funding Circle, CanCapital, Lending Club and dozens of others have created what amounts to a $1 trillion market, according to a recent article on TechCrunch.

This doesn’t mean that OML is going to send traditional banks the way of typewriter and buggy whip makers. Your neighborhood bank branch and small-business lender still do and will have an important function to perform. But strict regulation and rigid business models within the traditional lending industry have left major gaps when it comes to funding activity in the small-business marketplace. It is in these voids that creative and aggressive entrepreneurs are finding not only amazing business opportunities, but also an entire class of customer that until now has been grossly underserved.

What is online marketplace lending all about? How does it work? Why is it so attractive? Who are the customers? And why now?

The answers to all these questions lie in one of those serendipitous confluences of economic necessity, technological advancement and entrepreneurial creativity that creates a paradigm shift in what we believe is possible. The result is a new model for commercial financing that may soon become the primary medium many small to medium-size companies use to secure the capital they need to grow and prosper.

Over the next eight weeks, Experian® will deep dive into the State of Online Marketplace Lending, examining the lending market from all sides, piecing it together with opinions from thought leaders throughout the space and publishing our findings in a compendium ebook.

Let’s begin by tracing this trend to its source.

The roots of online marketplace lending

It is said that the Chinese character for disaster is the same as that for opportunity. If so, then it makes sense that the disastrous Great Recession of 2008 to 2010 should serve as the crucible from which the alternative lending industry should spring. When the economy crashed in 2008, the Western financial industry responded by replacing its overly lax lending requirements with regulations and lending standards so strict that many businesses, especially younger or smaller ones, found it all but impossible to secure financing under any conditions. Having been burned by their formerly liberal attitudes, banks and other traditional lenders decided the best way to minimize risk was to avoid lending to all but their most financially secure customers. (In other words, the only way to get a loan was to prove you didn’t need one.)

OMLs — particularly peer-to-peer lenders — began to appear a year or so before the market crashed. The rise of Facebook and similar social media platforms coupled with rapid advances in Big Data management allowed those with capital to quickly qualify potential customers via the Internet and issue short-term loans without the red tape and regulations that made borrowing from banks such a challenge.

“Technology is what has made online lending possible, online lenders benefit from having a much lower cost basis than banks. As a result, they can price their loans differently. And they can often make their lending decisions on the same day they receive an application.”

Once the Great Recession hit in force, small and medium-size businesses, finding that traditional capital sources had dried up like Lake Shasta in the California drought, flocked to these aggressive start-ups en masse. OML marketing messages soon became ubiquitous, ranging from 30-second radio spots to robocalls to business owners’ cell phones. Web-based payment services like PayPal began to offer their own business capital lending programs. To the surprise of the cynics, many of the new lending platforms actually worked. Businesses were able to borrow the funds they needed. Lenders enjoyed solid returns on their investments. And consumers reaped the benefits of an economy offering a broader range of goods and services.

Today, OML looks like it’s here to stay — which is not to say that banks have reason to panic.

“It’s important to note that many online lenders actually get their funds from traditional banks,” DeSoto stated. “Some people call OMLs ‘shadow banks’ because they’re able to use banks’ funds in ways that are not subject to all the same federal regulations.”

It is not just the source of the loans that distinguishes alternative lending from traditional commercial banking. The method, speed, qualifications and form of the loans themselves are also distinctive.

As the name implies, online lending is done via the Internet. Borrowers need not walk into a brick-and-mortar bank to fill out reams of mind-numbing paperwork. Instead, they need only fill out a usually brief online application and attach whatever documentation the lender requires.

What kind of documentation? Often, alternative lenders don’t require the detailed financial statements and tax returns commercial banks demand. Instead, a month or two of retail receipts may be all that’s necessary.

This is because many alternative loans are not the long-term, interest-based instruments to which we’re accustomed. Instead, many alternative lenders use “factoring” or revenue-based lending in which they take a small portion of each sale as repayment on the loan. Steady cash flow is more important than yearly sales volume or annual profits/losses. Another popular vehicle is so-called “peer-to-peer” lending that often involves small loans of $5,000 to $50,000 with terms of just one to five years. And now that online lending has become legitimate in the eyes of many, we’re seeing loans or “working capital advances” in the millions of dollars.

Like the most sophisticated banks, many OMLs — even some of the smaller ones — have access to advanced algorithms that allow them to evaluate a potential borrower’s suitability based on readily available business credit data in addition to cash flow, and activity data. But because their systems are mostly or even totally automated, OMLs can prequalify applicants in a matter of hours, if not minutes. Following prequalification, additional documentation may still be necessary before a loan is approved.

Of course, the larger the loan, the more documentation lenders require. Online lending reduces paperwork, but it doesn’t eliminate it altogether.

“Some companies still rely partly on manual application reviews. Some even promote their ‘live’ customer service,” DeSoto noted. “Still, it probably won’t be long before most online lending is 100 percent automated.”

Are you a candidate for online marketplace lending?

Expanding the market, not cannibalizing it

DeSoto stressed that online lenders are not taking business away from traditional lenders but are serving customers who probably would not qualify for traditional business loans. As such, they’re expanding the market, not cannibalizing it.

“Most small businesses that have been in business just one or two years wouldn’t even be on a commercial bank’s radar,” she noted. “These people would otherwise have to rely on friends, family or personal credit for funds. Online lending offers opportunities that simply did not previously exist.”

The role of business credit information

The role of business credit information — including any history of missed payments, delinquencies, pending judgments, bankruptcies and overextended lines of credit — is obviously critical to marketplace lenders’ ability to quickly and accurately assess risk and advance capital responsibly.

“Experian, the industry leader in consumer and business credit reporting, is proud of the part we play in making marketplace financing available to thousands of businesses nationwide and of the good this new and growing industry sector is doing to expand the economy” Laura  DeSoto concluded.

So in summary, a few key points about online marketplace lending:

In future articles, we will dive even deeper into the world of alternative and online lending, identifying the major players, looking closer at the risks and benefits, and predicting as best we can where the industry is headed. Next week, Charles H. Green from AdviceOnLoan will join us to examine how different yet similar online marketplace lending is to traditional lending.