Big Data The Storyteller and Problem Solver of Our Time 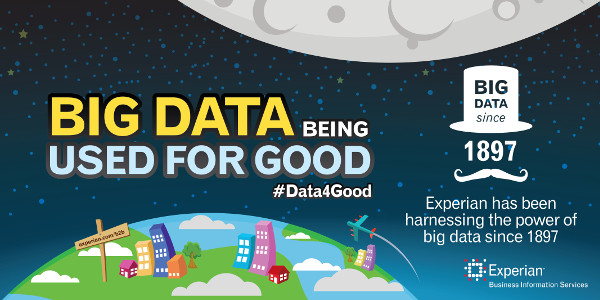 At the recent “Future of Data-Driven Innovation” conference, Emery Simon of the Business Software Alliance noted that each day 2.5 quintillion bytes of data is gathered. How much data is that exactly? To put it into tangible terms, if this data was placed on DVD’s, 2.5 quintillion bytes would create a stack tall enough to go from Earth to the Moon.

As Experian’s CEO, Craig Boundy recently blogged, at Experian, we have deep experience harnessing the power of data, in fact; we have been doing it since 1897. Using our insights to help merchants and consumers by providing an annual credit reference directory, we were using “Big Data” before it became a buzz word. You can read Craig’s blog post here.

But let’s talk for a moment about the economic impact Big Data can have on society. A recent McKinsey report estimates that improved use of data could generate $3 trillion in additional value each year in seven industries. Of this, $1.3 trillion would benefit the United States. 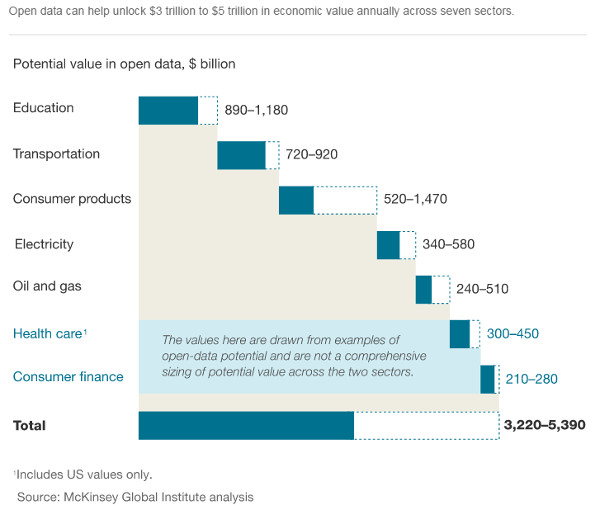 “Improved use of data could generate $3 trillion in additional economic value each year in seven industries.”

As consumers, we see the power of Big Data everywhere these days. Local and State governments are using data to tackle policy objectives like kick starting their economies and driving down crime-rates. In health care, Big Data is being used to reduce infant mortality. Researchers analyzing large data sets of vital signs from premature born babies discovered that whenever the vitals seem to stabilize, there is a high probability that a baby will suffer from a dangerous infection just a few hours later. Stable vitals are red flags, and recognizing them enables doctors to treat an infant before the full onset of the infection. And public health agencies are predicting and managing emergencies from the flu to Ebola with big data algorithms. 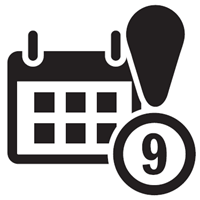 HealthMap.org is an innovative mapping website that uses algorithms to scour tens of thousands of social media sites, local news, government websites, infectious-disease physicians’ social posts, and other sources to detect and track disease outbreaks. When healthcare workers in Guinea started to see patients with Ebola-like symptoms and blogged about their work, a few people on social media mentioned the blog posts. These blog post mentions were picked up by Healthmap. The result, an algorithm using big data told the story of a looming Ebola outbreak nine days before the World Health Organization formally announced the epidemic.

Google can predict the spread of the flu, not through mouth swabs or by interviewing doctors, but simply by analyzing billions of search terms they receive from users of their search engine every day.

The city of Syracuse, New York wanted to understand why certain neighborhoods declined over time. The city was struggling with abandoned housing, a phenomenon that is often associated with crime, poverty, and health issues. Analyzing local education, social services, economic, real estate, and police data, the city of Syracuse worked with a team of IBM Big Data analysts who demonstrated that certain trends can presage a decline in public safety, property value, and small business growth.

In 2008 Starbucks CEO, Howard Schultz was forced out of retirement to get the company back on track after closing hundreds of under-performing stores. Starbucks now employs a disciplined data-driven approach to store openings by using Esri’s ArcGIS Online software, a sophisticated mapping platform which blends maps with demographic data. Starbucks can now pinpoint where their new stores should open, where they can be the most successful.

Big Data correlations help Amazon and Netflix recommend products to their customers. In automotive manufacturing, predictive maintenance based on Big Data correlations enables companies to predict when a car engine part needs to be exchanged before the part actually breaks.

In computer distribution, algorithms which analyze buying trends and payment data from millions of transactions can pinpoint the segment of customers who will soon stop buying. Identifying this cross-section of soon-to-quit customers enables sales organizations to proactively ramp up customer retention strategies to mitigate the risk of lost business. This helps our economy and our businesses thrive. 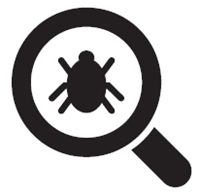 In agriculture, there are companies and universities blending hardware with big data. Apple farmers in the Midwest are using bug traps fitted with sensors that can identify specific types of bugs in the trap. The traps are connected to the Internet in a data portal that the orchard manager can see where an infestation begins and stop it in its tracks. Being able to turn insights into action, farmers can use data analytics on bug infestations to use fewer pesticides, grow their crop more consistently and more profitably.

The U.S. voter registration system is a challenge to manage. List maintenance can be difficult, and the system needs an upgrade. An inaccurate voter registration file can cost the government between $1 and $2 per year. For a state with 5 million voters, this could mean a cost of $0.5 to $2.5 million per year or more in additional costs, depending on the actual condition of the voter file.

Orange County, California was able to update more than 297,000 voter records using information from TrueTraceSM, one of Experian’s most powerful data hygiene products. It draws from Experian’s core consumer credit database of more than 220 million consumers and 140 million households, as well as access to 100 million wireless phone numbers. Orange County saved over $44,000 in the first election alone – savings that will grow with each passing election as the county avoids mailing materials to out-of-date addresses.

There are a lot of things to be excited about in the realm of Big Data. As Julie Brill, Commissioner of the Federal Trade Commission remarked at the recent Future of Data-Driven Innovation conference, “The data driven economy will not thrive unless the bits of consumer information collected and analyzed are used to benefit the consumer – plowed back into the relationship between businesses and their customers to make it stronger, deeper, and ultimately more profitable.”