Credit Management May 15, 2017 by Gary Stockton 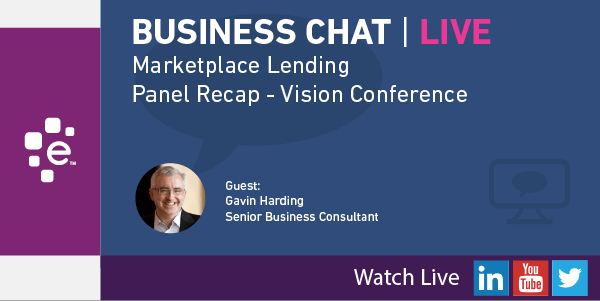 On May 9th we hosted an episode of Business Chat | Live on our YouTube channel and enjoyed an enlightening discussion with Gavin Harding, Senior Business Consultant with Experian Business Information Services. In our chat, Gavin shared highlights from his marketplace lending panel “Bridging The Gap: Reconnecting Investors with Marketplace Lenders in a Volatile World.”


Gary: We’ll get started here. Welcome everybody. My name is Gary Stockton and I’m with Experian Business Information Services and we’re gonna do a Business Chat Live today focusing on marketplace lending. I’m happy to be joined by Gavin Harding, and he’s a senior business consultant with our business information services team on the global consulting side of the business. And Gavin is out at the Experian Vision Conference, so good morning, Gavin, or good afternoon, I should say.

Gavin: Well, it’s a little of both. It’s morning for you and afternoon form me. Hi, Gary.

Gary: So you had hosted a panel discussion yesterday called Bridging the Gap: Reconnecting Marketplace Investors with Marketplace Lenders in a Volatile World. Who was on the panel with you?

Gavin: Well we had a really good industry cross section. We had Nat Hoopes who is the executive director of the Marketplace Lending Association. We had Frank Rotman who is the founding partner of QED Investors. And we had Peter Renton, who is the co-founder of LendIt, probably the biggest online marketplace lending conference worldwide.

Gary: Peter Renton, he has worked on the LendIt Conference, but also Lend Academy, right? That’s a resource for marketplace lending. I listen to his podcast.

Gary: We’ve spoken to Pete a number of times, so he’s quite the expert in that field. There’s been, in terms of marketplace lending and the news, there has been some negative news around the industry in recent past. Is that something that came up?

Gavin: Indeed it did. Over the last 12 to 18 months, there has been a spate of negative publicity. The industry in general, the media has in a way turned on the industry on the basis of a couple of events related to specific companies in the space. The good news is that while that negative publicity had a negative impact last year, it seems that the industry has rebounded. It seems that it was a watershed moment where the industry recommitted to transparency, where they enhanced their whole approach to risk, improved their approach to operations. So if we characterize last year as perhaps a low point, the general theme of the panel was that the industry’s really poised for growth, has grown up a lot over the last year.

And you know, we talked a lot about credibility and trust and so on, and Nat, from the Marketplace Lending Association, you know, obviously that group started about a year ago and it has now grown to 19 members, so pretty rapid growth. When we think about the 19 members, we estimated that that covers about 90-95% of the total volume of loans and credit facilities in the space. So Nat and his team worked hard on transparency, disclosure, harmonizing standards and so forth, so it was really good to have him on the panel.

Gary: And Experian, are we a member of the MLA?

Gavin: We are a proud associate member, yes we are.

Gary: Excellent. So let’s talk a little bit about bank partnerships and what are the kinds of things you were talking about related to bank partnerships? I’m sure that was a big part of the discussion.

Gavin: It was. About 24, 36 months ago is when this topic became pretty hot. Lots of conversation between banks and players in the industry. Those conversations in some very high profile ways result in partnerships. We think about Chase, we think about OnDeck. As the year has progressed, what’s started to happen is, the mood within the industry has changed. Banks now expect partners in this space to speak their language in terms of risk, to be fully compliant, to understand all the rules and regulations.

So the short statement is that in the last year, within the online lending space, compliance has become a competitive advantage. Compliance and operational discipline has become a selling point. So again, that’s part of the ongoing theme of the industry and the sector growing up and maturing, so really positive.

The one comment that I believe Frank had was as we think about partnerships with the banks, be prepared to hear no a lot before you get to yes. Be prepared to translate between the two very distinct audiences. So in terms of working with banks, use their language, understand the regulations, understand what pressures and demands are on them, and the outcome of that will be a much higher success rate and much more positive, productive conversations.

Gary: Excellent. How about the sector performance overall? Is it a growing sector? The banks, I would imagine they’ve expressed a lot of interest in that. Are we seeing growth in that sector?

Gavin: Interesting question. We talked about some of the negative publicity last year. Some of that related to some practices in parts of the industry over the last two to three years, so what’s happening now is, because of a refocus and redirection towards credit risk management putting out more and better loans for appropriate returns and so forth, we’re seeing the whole industry performance has really been elevated. A lot of the perhaps substandard loans or facilities have now run off, run off meaning they’ve matured and have been paid off. And the new business that’s been put on is more sustainable. It’s a more disciplined approach. So yes, overall the sector has improved significantly in terms of performance over the last year.

Gary: Excellent. And so, obviously you’re meeting with plenty of Experian clients there at the conference. What is this, your third or fourth Vision?

Gavin: This is my third and we are here with, I think it’s a little over 500 of Experian’s clients globally. Many of clients from Europe, Asia, and so on so it’s a really great experience.

Gary: Yeah, and I saw you had Steve Wozniak, co-founder of Apple Computer as one of your keynote speakers.

Gavin: That’s right, that’s right. On Monday morning for our breakfast presentation, we had the Woz and the big news on that, Gary, is, I know this will probably startle any listeners, that apparently Steve Jobs was not always a very nice person. So that’s a newsflash there.

Gary: Brilliant guy, though. You can tell I’m a customer.

Gavin: Fantastic. The innovation, the dynamism was just radiating from him. He talked about some of his rules of life and he said he was never interested in money, he was interested in thinking and creating things and making things work. Somebody said, “Steve, what motivated you when you were an employee at Hewlett Packard and how does that maybe translate into what we should be doing with employees?” And Steve Wozniak said the major attraction for him at Hewlett Packard was that they let him go into their stores, their inventory, and take whatever electronic parts and components he wanted to create his own products at night. So he would talk about going home, having dinner, and going back, going into the stores, grabbing the components, and then making the products. And some of the original pre-Apple I computers were made from Hewlett Packard parts in Steve Wozniak’s – he said didn’t actually have a garage. It was more of a basement, but in his house. So really an interesting presentation. A really dynamic guy. We were lucky to have him.

Gary: And you also had, an economic presentation by Diane Swonk I think I saw.

Gavin: Diane Swonk this morning, really interesting presentation. A little bit of a different perspective than what we often see in terms of the high-level economic factors like just raw unemployment versus full employment and so on. She dug a little bit deeper but beyond that she had a couple of key messages. One of the messages is that we are almost at, depending on definition, full employment. Wages have increased over the historical averages over the last couple of years. So while the broad improvement in the economy was visible, it’s only now hitting our pocketbooks. It’s only now coming through in consumer spending. So that was pretty positive.

She has worked a lot with both the current and past administration in terms of economic advisors and committees and so on, done a lot of work in Washington, DC. She is very much taking a wait-and-see cautious approach in terms of what the administration is saying. She confirmed that the intent or the goal investing heavily in infrastructure should have a dramatic effect on the economy overall, so she was supportive of that. The one question she had, and actually what she said was that her son on the way to school in the morning on the back of a napkin should be able to work out what the plan is to spend and at the same time reduce taxes without the other side of the equation is, to be charitable, going to require further definition.

Gary: Wow, sounds like quite a conference. I’m quite envious that I’m not there to enjoy it with you this time, but maybe next time.

Gavin, I really appreciate you taking time out. I know that there’s a lot of people that you should be meeting with there, so I’m gonna go ahead and maybe end it right there for now. Maybe we can schedule another business chat soon. I know something’s coming up with Moody’s Analytics and yourself in June and the next release of the Main Street Report for Q1, so I’m excited to maybe talk about that in further detail with you very soon.

Gavin: I look forward to it. Thank you very much, Gary.

Gary: All right. Thank you very much.