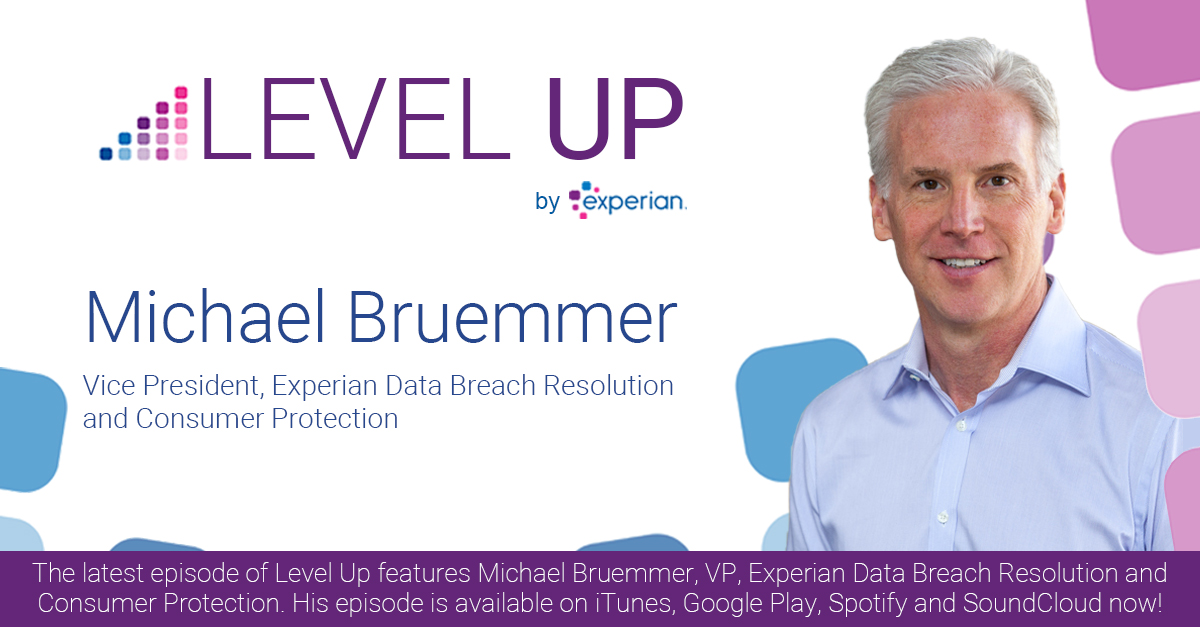 Most recently, we spoke with Michael Bruemmer, VP of Experian Data Breach Resolution and Consumer Protection. With more than 25 years in the industry, Michael has handled some of the nation’s largest breaches over his tenure with Experian. He is a respected speaker and presents to industry organizations across the country on the topic of data breaches and provides insight to many trade and business media outlets including Dark Reading, IT Business, CIO, Info Security, Security Week, Health IT Security, Wall Street Journal, American Banker and others.

Here are a few takeaways from our discussion with Michael:

Valuable experience can come from anywhere.
Michael had a variety of jobs including mowing lawns, caddying at a golf course and working in a slaughter house for Oscar Mayer. Michael learned a lot of the leadership skills he has today working for Oscar Mayer. For example, he was charged with supervising a crew of people twice his age, something that taught him a lot in a short amount of time. Don’t underestimate the valuable lessons certain gigs can give you!

There’s a lot more to discover outside of your bubble.
Michael has some very unique experience working overseas in various parts of Europe, and he acknowledges those years spent across the ocean were very formative for not only his career but his personal life as well. As he stated, “When you get out there, you realize that [where you are] isn’t the center of the universe. There are a lot of other cultures out there to experience.”

Have a vision.
The entire point of leadership is doing a good enough job so that others might want to follow you, and that won’t happen unless you, the leader, have a clear vision of where you and your team are going. Once you have an idea of what needs to be accomplished, your team will be able to work toward that vision, too. One way Michael communicated this to his team at the slaughterhouse was by having a regular huddle at the start of every shift to discuss what happened on the previous shift, what needs to be accomplished, how they are going to get it done and what was expected of everyone that day.

Be the person who helps.
We all know by now that simply telling others what to do doesn’t constitute as leadership. Michael’s best advice for emerging leaders is to be unafraid to get your hands dirty and help your team. By helping your direct reports, taking roadblocks out of their way, giving them resources and coaching them, you are not only elevating overall performance, you are also priming the next set of leaders, and we should always take pride in that.

Make sure you have a win every day.
“Make Your Bed” by Admiral William McRaven helped Michael understand that life feels a lot better when you make sure you have a win every day. The premise is that no matter how small the win—even if it’s just making your bed nice and tidy—you should feel empowered to celebrate it. Like Michael pointed out, even if it isn’t significant to others, you can say to yourself, “Hey, I’m making progress and I’m putting one foot forward.”

Find your helplines.
Sometimes it will feel hard to keep on trudging on, as life inevitably throws you unforeseen obstacles, and it’s important that you know where you can get help—whether that’s with your colleagues, a resource group, your boss or a friend. As the father of a son who has fought against substance abuse, Michael knows the importance of identifying your resources and taking advantage of them so that you have the ability to not only continue on with your job but feel safe enough to bring your whole self to work every day. Michael advises that everyone practice the art of empathy and be more mindful of the fact that work does not always take center stage.

Pay attention to your organizational agility.
This just means you aren’t afraid to get down in the weeds and work side-by-side, but you’re also just as comfortable walking into the CEO’s office and having a conversation. Whether you’re “wallowing with the hogs or soaring with the eagles,” as Michael put it, you have to get used to creating and maintaining relationships at every level of the organization.

We were so happy to have the opportunity to chat with Michael for Level Up.