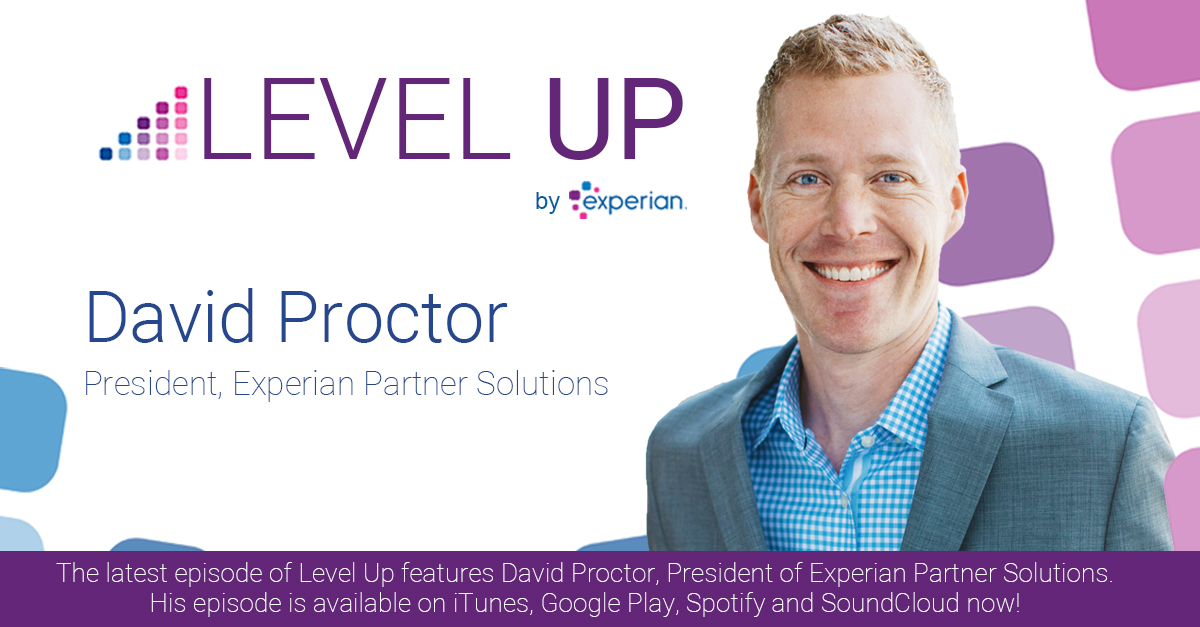 Most recently, we spoke with David Proctor, President of Experian Partner Solutions. Under David’s leadership, the credit bureau received material investment to fuel product innovation, market expansion and technology initiatives that will create long term value for Experian. David has spent his entire career managing large product portfolios and driving new product innovations. Prior to joining Experian, he spent 7 years in the telecommunications industry with both regional and national carriers in product development and marketing roles.

Here are a few takeaways from our discussion with David:

Leadership is situational.
Your leadership can vary from person to person most of the time. David’s philosophy on leadership is no matter what level, a real leader has to get to know everybody on the team and give them a voice. Once you know the personalities on your team, the proper leadership style will follow.

Bring more of yourself to your role.
Experian lives by the words, “Bring your whole self to work.” David wholeheartedly agrees and believes that this is especially important for leaders. When you have the courage to bring more of yourself to your role, you show your employees it’s okay to bring your whole selves to work, and you set a good foundation for connections to be made. As a result, trust is built among the team.

Try to look at challenges as opportunities.
After David moved from Texas to California for a new opportunity within Experian, he came across a lot of challenges and struggles any other person might have started panicking over. Instead of worrying about or fearing his circumstances, David found his situation “invigorating,” and now encourages others to look for the opportunities in these kinds of challenges. For example, through this experience, David was forced to learn the business more quickly and take on more responsibilities, making way for him to move up further.

Tailor development to the individual.
Just like your leadership is situational, the way you choose to develop your team has to be unique to each individual as well. David believes tweaking your talent agenda to each team member and their needs, wants, goals and motivations is the best way for a leader to understand the way the team works. It will also help clarify who might need more help and guidance in their own career.

Create an environment where everyone feels empowered.
Unfortunately, it’s easy to stifle innovation when it feels like there is only one accepted way to do things. In order for employees to come forward with new ideas and suggestions, they need to feel safe enough to do so, and it’s the leader’s responsibility to provide that safe environment. David says a good leader will empower their employees and allow them to vocalize ideas and challenge the status quo. Don’t let the idea of a bureaucracy sway you from the opportunity to innovate.

Diversity of thought can only contribute to success.
Whether this diversity is displayed through gender, race, sexual orientation, ability, etc., different people from different backgrounds will always offer unique and contrasting experiences that can benefit a company in the long run. As a lot of our leaders on Level Up—including David—have said, what makes us different is what makes us better.

We were so happy to have the opportunity to chat with David for Level Up.