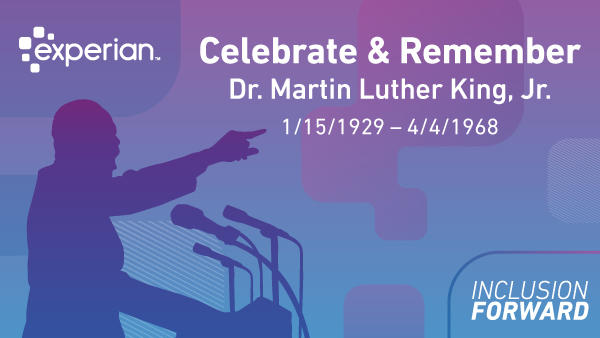 The legacy of Martin Luther King, Jr. is one that has spanned generations and continues to inspire people around the world. The hope he brought with his message of non-violence was a catalyst for change for millions of people, including many of us who work at Experian. We are honored to share what Dr. King’s legacy means in our own lives and how we plan to carry his message of courage, strength, and determination into the future.

“Love is the Greatest Force in the Universe”

“What inspires me about Dr. Martin Luther King, Jr. is the way he was always able to show love, no matter what he was going through,” says Chris, VP of Sales at Experian. “Despite threats, despite social injustices, despite assassination attempts on his life–he didn’t grab a gun. He didn’t teach hate. He taught love. Just like Dr. King, I teach and tell others that no matter what you’re going through, or how hard it gets, just show love–genuine love–and it will always work out.”

His Message of Nonviolent Resistance

Gary, Senior Manager, BIS, says the thing that inspires him the most about Dr. Martin Luther King, Jr. was his message about nonviolent resistance, and how it can bring about social change. “A simple but powerful act of boycotting public buses en masse brought about the November 1956 ruling by the Supreme Court that segregation on public buses was unconstitutional,” he says. Today I celebrate the life, legacy and message of Dr. Martin Luther King, Jr.”

“I Can Do Small Things in a Great Way”

“His work taught me never to give up hope in the face of despair,” says Corliss, Senior Manager, Financial Inclusion, DEI Marketing. “As he said, ‘We must accept finite disappointment, but never lose infinite hope.’ Dr. King also taught me that we have a role to play to make a difference in this world, and that ordinary people can do extraordinary things. He said, ‘If I cannot do great things, I can do small things in a great way.’ So thank you, Dr. King, for your legacy of hope, love and reminding us again, that ordinary people can do extraordinary things.”

Bryan, Social Media Specialist, says King’s iconic “I have a Dream” speech has been a huge inspiration for him. “That speech…taught me that if you believe in something, stand up for it. It taught me to be the change that I want to see in the world,” he says. “I’m proud and honored to continue his legacy. So, Dr. Martin Luther King, Jr.–you had the dream, and now it’s my job to make sure your dream becomes reality.”

“I believe it is MY responsibility every day, to use my privilege to ensure Martin Luther King Junior’s dream is not buried,” says Emily from Business Information Services. “To amplify the voices of people of color who are still not being heard because white people will not stop talking. Today, I will listen, I will learn, and I will practice ‘dangerous unselfishness.'”

Together, We Make the World a Better Place

Taneishia, Account Executive, Software Sales, says that hearing Dr. King’s “I Have a Dream” speech as a child encouraged her to dream, to hope, and to believe in something bigger than herself. “His work and his impact is evident in the fact that I, a woman of color, a Black woman, have the opportunity to work for a company like Experian alongside people of all types of ethnicities and backgrounds,” she says. “Coming together, we are making Experian and the world a better place.”

Taking the First Step, Even When You Can’t See the Entire Staircase

“When reflecting on the memory of the late, great Dr. Martin Luther King, Jr., there are so many things that I’m struck by,” says Jennifer, Senior Manager, Marketing. “His grace, his humility, and his ability to triumph in the face of adversity. One of the things that he said is that faith is taking the first step, even when you can’t see the entire staircase. This resonates with me, because it shows that in times of difficulty and uncertainty, you just have to keep moving forward, taking the first step. Even though you don’t know what the end result will be.”

“We have an opportunity to make America a better nation.”

We are grateful to Dr. King for his tireless efforts towards equality for all people, for his vision of the future that he would hold, but never see. Today we at Experian join people all over the world as we honor his memory, his work and his legacy.