I love this time of year. Anticipation builds around the match-up, Green Bay vs. Pittsburgh, Danica Patrick plus Jillian Michaels on the eagerly anticipated Go Daddy commercial, and whether the Super Bowl could cause a heart attack mid-game.

But beyond Packers vs. Steelers (I’ll leave the Patrick vs. Michaels match-up for a post game analysis) there’s another interesting match-up for my online data peeps; is social gaining on search as a navigational tool. First lets look at a chart of “Super Bowl” searches over the last three years. 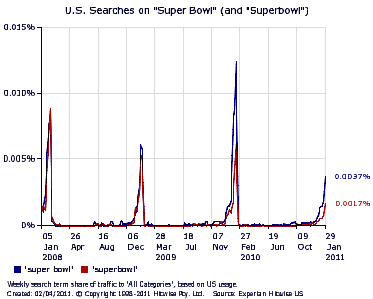 First, we should note that over the last three years, U.S. searchers have realized that the Super Bowl is spelled as two words, not “superbowl.” Also by looking at this chart you might guess that, by search volume, there is less interest for online Super Bowl content. A separate analysis of visits to the official Super Bowl site however, indicate that we’re seeing a greater pregame surge in visits than in previous years. So why is traffic share on the term “Super Bowl” declining this year?

The chart above compares upstream traffic to Superbowl.com for this week versus the week before Super Bowl last year, you can see that traffic from all three search engines to the official game site have dropped, while traffic from Facebook has more than doubled.

Is this a sign that, as a navigational tool, social is gaining on search?

On a separate note, one of the reasons that I love working at Experian Marketing Services is the sheer volume of data that we have at our disposal, both online and offline. Check out these posts here and here from my esteemed colleague Bill Schneider on the depth of our market data comparing Pittsburgh to Green Bay.