The holiday season is a critical time for retailers and every dollar counts. Targeting Hispanic consumers, an increasingly influential consumer segment, can mean the difference between a good season and a great one. Read on to learn valuable insights marketers can use to understand Hispanic consumers: where they shop, as well as how they use smartphones and social media to shop and connect with brands. For more holiday insights, join us on December 5th for a live analysis from peak week. We’ll share what consumers are searching for and which retailers are winning in capturing the shopping audience.

Hispanics projected to spend $183.8 billion on non-essentials in 2013

Smartphones are an important shopping tool

As Hispanic shoppers hit the stores this holiday season, smartphones are sure to play an important role. Hispanic adults are slightly more likely to own a smartphone than non-Hispanics (56 percent versus 55 percent overall) and among smartphone owners, Hispanics are 16 percent more likely to access the Internet more through a mobile device than a computer.

Given Hispanics’ openness and receptivity to mobile advertising, marketers should consider leveraging smartphones for campaigns targeting this group. Specifically, Hispanic smartphone owners are twice as likely as non-Hispanics to say that they are interested in receiving advertisements on their phone and 58 percent more likely to purchase products they see advertised on their phone. Furthermore, Hispanics are 13 percent more likely than non-Hispanics to say that they often use their mobile phone to find local deals.

When it comes to shopping, 54 percent of Hispanic smartphone owners visit shopping sites from their mobile browser during a typical month compared to 50 percent of non-Hispanic smartphone owners. Hispanics also spend more time browsing shopping sites from their phones than non-Hispanics, spending 18.2 minutes per month on average visiting such sites versus an average of 16.7 minutes spent by non-Hispanics. Interaction could increase offering mobile content both on websites and apps in Spanish to capture additional potential customers that may prefer to shop in their first language. Regardless of language, optimizing the shopping experience for the smaller screen is always key to avoid frustrating the customer. Below are the top indexing shopping sites Hispanic smartphone owners visit from their phone.

Hispanics show a propensity to shop online retail websites through a PC as well. During a 24 week period, the market share of visits to the Hitwise® Retail 500 websites was 21 percent higher on average than the online population. As the holidays come closer, the gap is increasing as Hispanics ramp up shopping efforts earlier in the season with 33 percent more visits to retail websites. Hispanics also had a higher tendency to visit the tech-oriented computers and electronics categories than the online population overall. 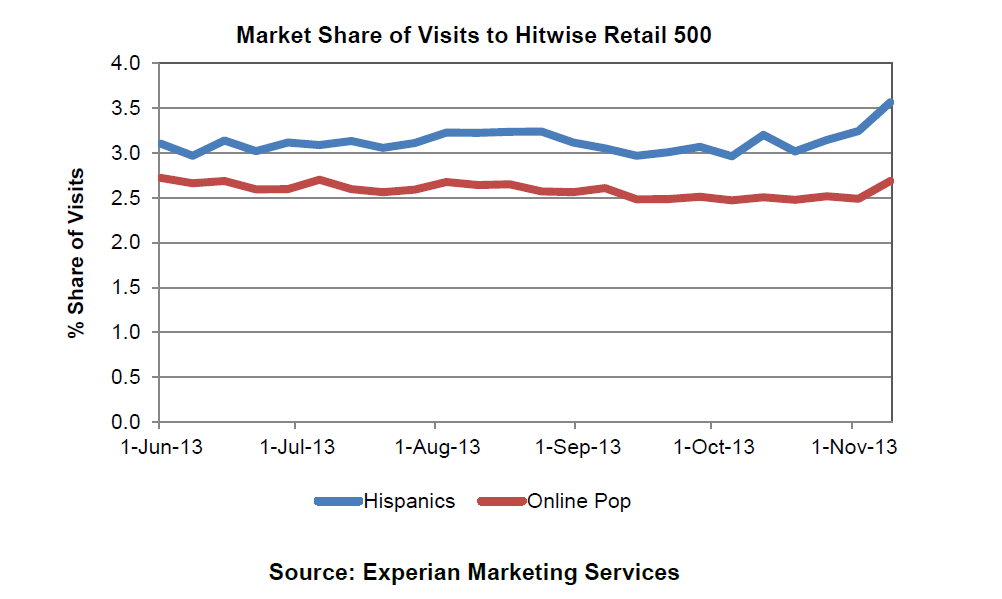 The top retail websites visited by Hispanics mirror the online population, Amazon.com, Walmart.com and Target.com. However, when looking at the retail websites where there is a higher difference, brands such as Keurig, J. Crew, Coach and Hollister emerge. 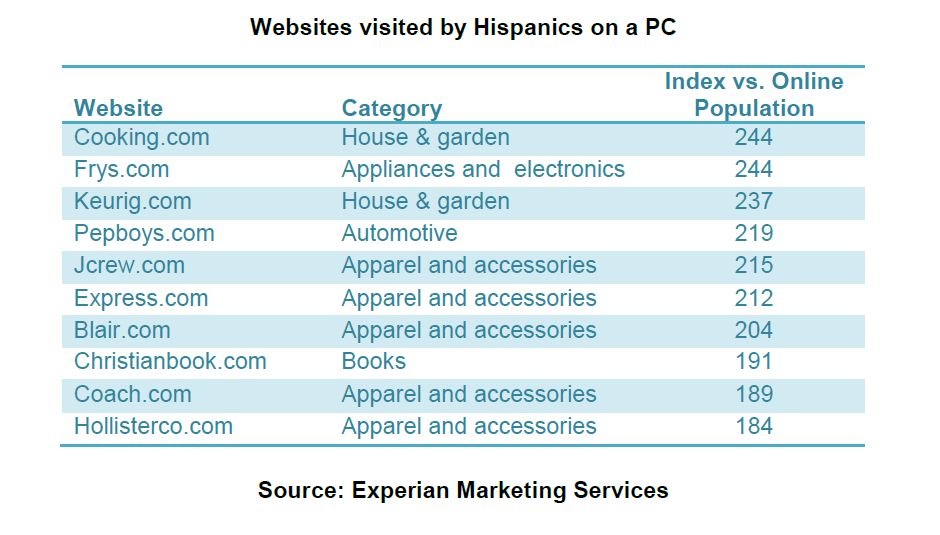 For additional insight on Hispanic shoppers, including more on discretionary spending by region and use of smartphone shopping apps, download the full analysis.

For weekly insights into what products consumers are searching for overall and which retailers are garnering the greatest share of online traffic, visit our Hot Holiday Products and Trends page. Bookmark the page and come back every Tuesday for fresh insights.