Based on the overwhelming national popularity of the Packers and Steelers, many football enthusiasts consider this year’s Super Bowl to be a marquee matchup. It’s the rich and unique tradition of the Packers versus the gritty work ethic of the Steelers. If you are feeling nostalgic, it’s Titletown versus the Steel Curtain.

An enlightening glimpse into the lifestyles of Packers and Steelers’ supporters living in Green Bay and Pittsburgh, and surrounding communities, creates exciting targeting opportunities for marketers. Using Mosaic segments from Experian to dissect these two markets, marketers can identify the “Small-town Contentment” of Green Bay – these are middle-aged, upper-middle-class families living in small towns and surrounding satellite cities, versus the “Blue-collar Backbone” of Pittsburgh – these are budget-conscious, young and old blue-collar households living in older towns.

MEET THE PREDOMINATE HOUSEHOLD TYPES IN PACKERS AND STEELERS COUNTRY

In Green Bay you will find over twice the concentration of households from the Small-town Success and Family Convenience segments compared to Pittsburgh. Successful Suburbia (these are upscale, middle-age, married couples with children), the fifth most populated segment in Green Bay, is also the most over-represented segment with five times the concentration of households compared to the national average.

In Pittsburgh you will find a larger share of neighborhoods consisting of households from the Urban Commuter Families and Steadfast Conservative segments compared to Green Bay. Lower-income Essentials (these are lower income, empty-nesting couples and aging seniors) is the third most populated segment in Pittsburgh. With over eight times the concentration of households compared to the national average, this is also the most over-represented segment in Pittsburgh.

SUPER-SIZED MARKETING IS NOT FOR EVERYONE

Not all marketers can afford to spend millions of dollars placing Super Bowl ads to reach massive audiences. A more efficient approach is to target various market segments with relevant messages, using the power of segmentation solutions. A retailer developing a marketing campaign for its new line of children’s apparel should target growing families in the Small-town Success and Family Convenience segments, rather than including populations with older couples and seniors in households that are much less likely to contain children. Time and time again precision targeting based on consumer lifestyles delivers greater return on marketing spend.

While an examination of the differences in the predominate lifestyles and demographics of Green Bay and Pittsburgh may not lead us to a prediction concerning the outcome of the big game, we know one thing for certain – We’ll see lots of Cheeseheads wearing Packer gear trying to out-cheer their Terrible Towel twirling counter parts on Sunday.

What marketing are you doing in honor of Super Bowl Sunday? Does the research and segment information shared here surprise you?  Share your comments below. 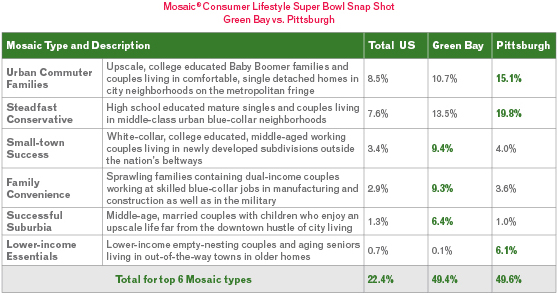