Is Advanced TV the answer to today’s sonic boom? 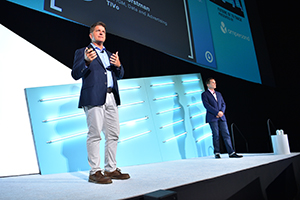 Earlier this month, I had the pleasure of participating in a discussion on the future of data marketing in the TV business with TiVo’s Senior Vice President and General Manager of Advanced Media and Advertising, Walt Horstman. Together, we discussed challenges advertisers face as the video distribution system fragments and how brands can best adapt to make the most of this data-driven and digital media landscape using Advanced TV.

We began by setting the stage for the room of 200 advertising and martech executives who were settled in big comfy chairs at the AMC Lincoln Square in NYC. Walt and I discussed what we call a “Sonic Boom” in the TV distribution industry. The business has already been splintered thanks to streaming destinations, and the next year will see a dramatic increase in service options with the releases of Disney+, Apple TV+, WarnerMedia’s HBOMax and NBCUniversal’s Peacock. Advertisers can no longer rely on the traditional TV ad model since there is no guarantee that the customers they want to reach will be watching the program they advertise on.

So where does that leave us? Well, the good news is that the television industry is advancing and giving advertisers smarter ways to connect with their audience. One example is Connected TV, which is being used by more and more households. Sixty-five percent of U.S. households currently have a Connected TV device and 70 percent have a subscription video-on-demand-service. And while 25 percent have spent time consuming content on Connected TV, that number is expected to reach equilibrium in the next five years.  Another growing trend is Addressable TV, which allows you to target specific households instead of specific programs. Meaning, you and your neighbor could be watching the same program on the same network but see different ads based on your demographics, interests, or past buying behaviors. According to Nielsen, addressable ads are predicted to hit $4.7 billion in 2020.

With all that in mind, we shared a few case studies to demonstrate the power of both Addressable and Connected TV and how, by combining the 1st party set box data from TiVo with Experian’s 3rd party demographic data, TV advertisers can maximize their TV spending.

We discussed a building product supplier that ran an Advanced TV campaign to determine if there was a lift in website traffic from households that saw an ad and visited the supplier’s site vs. those in target who didn’t see an ad. The Advanced TV campaign ran for 60 days with a post 30 day attribution period. Overall, households who saw an ad impression had a positive lift of 24 percent over the control group.

On the Addressable TV side, we shared a case study about a large private auto dealership that wanted to ditch traditional demo-based linear TV and test whether their Addressable TV strategy was effective in driving foot traffic into their dealership. The results showed that those that saw the ad increased their visitation 19 percent more than the control group.

Lastly, we did some myth debunking. While many believe that you can only measure a campaign with 1st party data, businesses can use various data sets to measure a campaign. An auto dealership used Experian’s 3rd data combined with a location service’s data set to conclude that those that saw their TV ad were 19 percent more likely to visit the site than those who didn’t, proving the abilities of 3rd party data sets.

Whether it is real-time advertising, upfront purchases, utilizing 3rd party data, Connected TV or Advanced TV, Advanced TV is the future of television advertising. By using the techniques demonstrated in the case studies, the TV advertising business will not only survive the incoming “Sonic Boom,” but thrive because of it.