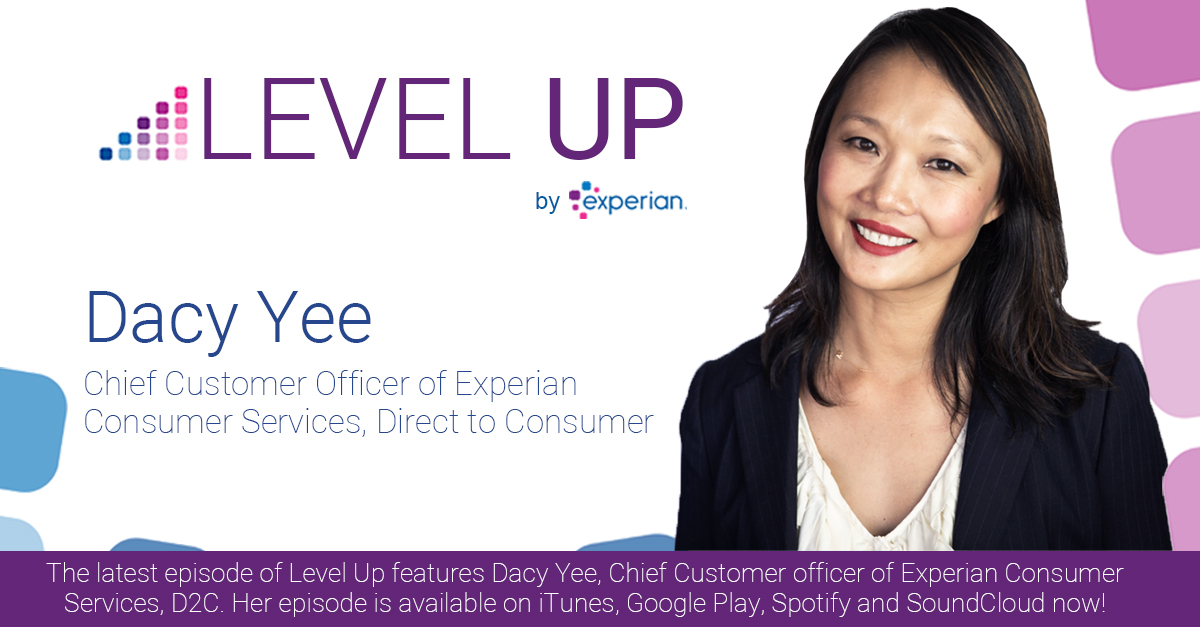 Most recently, we spoke with Dacy Yee, Chief Customer Officer of Experian Consumer Services, Direct to Consumer. In this role, Dacy drives the vision and execution of Experian’s customer focused strategies in order to deliver optimal experiences, communications and offers to customers, and engage them with Experian’s products and services, building brand advocacy.

Here are a few takeaways from our discussion with Dacy:

Your goals will change a lot. That’s OK.
Dacy encourages everyone to be unafraid of change, as most of the rewarding moments of her life came with great change. Even though you may be goal-oriented, it’s important to remain flexible and accept the need to change and adjust goals. Dacy’s career came to a fork when she was faced with the decision to move forward with a career in law or in marketing. Her choice of the career that would make her most happy has ultimately led her to her current position as Chief Customer Officer at Experian.

You have to be intentional about your balance.
The word “balance” is thrown around the workplace a lot, and by now, you know what it means. But being intentional about the different balances of your life is a challenge in itself. As a breast cancer survivor who was diagnosed just after buying a new house and giving birth to her second child, Dacy knows a thing or two about being intentional about your balance; in fact, she treats this as another one of her goals she must achieve. Like she said, it’s so easy to get wrapped up in your professional goals and begin to sacrifice other parts of your life, but balance will not come to you; you have to actively pursue it.

Support does not have one look.
When you notice a colleague might be going through a hard time, you may question ways you can best show your support. The truth of the matter is, support looks very different to everyone. It might be hard to gauge whether someone wants you to ask if they need anything or if they’d just like to be left alone, but as Dacy suggested, sometimes it’s just best to go ahead and do some of the things you know will help. For example, one of the things Dacy appreciated most during her battle with cancer was lotion for her dry skin (a side effect of chemotherapy).

Acknowledge your doubts and move forward anyway.
We all hear that voice that tells us we aren’t good enough or that we aren’t ready for the next big thing in our lives, and a lot of leaders tell you to ignore or stifle this voice. Instead of doing that, Dacy’s advice is to listen to and acknowledge this voice. Even as a C-suite level executive, Dacy still hears this voice from time to time, but what’s different is the way she’s adapted to that voice. Instead of ignoring that voice, Dacy now arms herself against it by reminding herself of her strengths—like she said, she is confident in her ability and her drive to figure out anything she may not know or be prepared for. Sure, you might not be ready for what’s next and that’s OK. But you can always count on your capabilities to help you along the way.

Embrace the diversity of your team.
At Experian, we all know how important it is to bring your whole self to work every day. The diversity of our teams is what makes us so innovative and successful—the more perspectives and ideas we have, the better off we are. Dacy also reminds us that diversity can also come in personality types. There’s a misconception that all leaders are extroverts, but Dacy considers herself extremely introverted. That doesn’t make her any less of an effective or impactful leader. Diversity in background, personalities, approaches and more will always be a good thing.

We were so happy to have the opportunity to chat with Dacy for Level Up.